I’m writing this from my office, looking out on the lush Homewood campus, poised to welcome new and returning students to Johns Hopkins. I am anticipating all that the new academic year has in store for the Krieger School of Arts and Sciences, and I can’t wait to meet our new students, learn about original discoveries our faculty and students are about to make together, and hear from alums recent and long-ago who are out transforming the world.

But before the hum of rigorous scholarship returns to our classrooms, I want to take a moment to look back at the year we just finished—a year full of growth, celebration, and the kind of advancements in every field that make the Krieger School the leader we are.

Whether they are involved in the humanities, the natural sciences, or the social sciences, Krieger School faculty members are always on the quest to discover new knowledge. Here is some of what they’ve been working on.

Robert Johnston, Assistant Professor of Biology, grows human retinas in the lab to determine how cells that allow people to see in color are made.

, Bloomberg Distinguished Professor of Sociology and Education, serves as one of the principal investigators for the General Social Survey, which tracks public opinion on an array of issues ranging from happiness to the media to religion.

Nicholas Papageorge, Assistant Professor of Economics, and colleagues find that African American students who had at least one black teacher in elementary school were more likely to go to college.

Kevin Schlaufman, Assistant Professor of Physics and Astronomy, and colleagues find what could be one of the universe’s oldest stars, a body almost entirely made of materials spewed from the Big Bang.

Distinguished Bloomberg Professor Vesla Weaver, Department of Sociology, is using specially designed Portals to inspire conversations about police-community relations in cities across the country and even around the world. 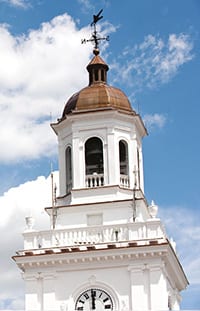 Because of its renowned scholarship in these fields, Johns Hopkins is often thought of as the birthplace for the robust study of the humanities in the United States. The legacy continues!

At the start of the spring semester, the Krieger School welcomed the Classics Research Lab, launched as the first dedicated space for humanities undergraduates to join ongoing research projects, collaborate with faculty and peers, observe mentors in action, and find the kind of permanent intellectual home that science students have enjoyed for generations.

Thanks to a generous gift from alumnus Rob Friedman ’81, the Krieger School is launching the Richard Macksey National Undergraduate Humanities Research Symposium. This brand new event is the first national undergraduate symposium of this scale focused on the humanities. For many students from all across the country this will be their first exposure to the world of academic research. We anticipate 400 students presenting their research over the two days of the conference (held on campus in April 2020), in humanities fields ranging from history and literary studies to film
and creative writing.

The Passing of a Legend

The Johns Hopkins community was saddened to learn about the death of well-known humanities Professor Richard A. Macksey, on July 22, after a brief illness. He was 87.

Macksey was a legend not only in his own fields of critical theory, comparative literature, and film studies but across all of the humanities. “Legend” doesn’t really sufficiently describe Macksey, who managed to fuse enormous intellectual achievement with a deeply human nature. He was a man who read and wrote in six languages; was instrumental in launching a new era in structural thought in America; maintained a celebrated library of more than 70,000 books and manuscripts in his home; inspired generations of students to follow him to the thorniest heights of the human intellect; and penned or edited dozens of volumes of scholarly works, fiction, poetry, and translation.

Macksey loved classical literature, foreign films, comic novels, and medical narratives—all subjects he taught at one time or another. Conversations with him were renowned for the way they leaped from one topic to another—all connected by his seemingly boundless knowledge, prodigious memory, and sense of humor—and surprised his interlocutors into new levels of understanding. For many at Hopkins and far beyond, he was no less than the embodiment of the humanities both in intellect and spirit.

Born in New Jersey in 1931, Macksey planned to be a doctor and had launched his collection of medical books by the age of 5. After beginning his undergraduate studies at Princeton, he transferred to Hopkins and earned a bachelor’s degree in 1953 and master’s degree in 1954, both in Writing Seminars. He went on to earn a doctorate in comparative literature from Hopkins in 1957, writing his dissertation on Proust in French. While completing his thesis, he took a teaching position at Loyola College in Baltimore (now Loyola University Maryland). A year after receiving his degree, he returned to Hopkins as assistant professor in the Writing Seminars. Quickly expanding beyond the writing workshops and “modern writers” courses he began teaching, he soon introduced a film course and initiated the first courses at Hopkins on African American literature, women’s studies, and scholarly publishing.

In 1966, Macksey led the charge in founding the Johns Hopkins Humanities Center as a meeting ground and incubator for problems, ideas, and discussions across disciplines. A degree-granting department, the Humanities Center sponsored graduate and undergraduate courses in literature, art, philosophy, and history; ran a graduate program; and maintained an active program of visiting scholars, professors, and lecturers. Macksey served as its director from 1970 until 1982, and was a professor on its faculty until his retirement in 2010. In January 2018, the center was renamed the Department of Comparative Thought and Literature. Macksey continued to teach several courses until as recently as spring 2018.

Also in 1966, Macksey—along with French literary theorist and philosopher of social sciences René Girard, then associate professor of French at Hopkins, and deconstructionist and literary critic Eugenio Donato, both of whom co-founded the Humanities Center with Macksey—convened an international symposium at Hopkins called “The Languages of Criticism and the Sciences of Man.” It was the first time that many leading figures of European structuralist criticism (including Jacques Derrida, Jacques Lacan, Roland Barthes, and Paul de Man) presented their ideas to the American academic community, throwing open a new conduit to avant-garde French theory and placing Hopkins at the center of intellectual conversation.

To learn more about Macksey and to read fond remembrances, visit bit.ly/macksey

“When we think about democracy, and its original formulation, it was about the capacity of people to act together. How is it that we can rebuild the foundations of democracy, not in a way that is partisan, but in a way that is about restoring faith in the democratic process itself?”

—Political science scholar Hahrie Han was named the inaugural director of the SNF Agora Institute at Johns Hopkins in April. A scholar, prolific researcher, and author, Han comes to Hopkins from the University of California, Santa Barbara, where she was the Anton Vonk Professor of Political Science and Environment Politics. While there, she ran a lab—known as the “P3 Lab” because it studied how to make the participation of regular people possible, probable, and powerful—that was dedicated to investigating how to build meaningful political and social action among ordinary citizens.

It’s been a long time coming, but a true student center—a nonacademic social place for students—is going to be constructed on campus. In early March, President Ronald Daniels announced to a crowd of several hundred students gathered on the Beach that the university intends to move forward with plans to build a student center at Homewood. Stay tuned for details!

The Krieger School’s Advanced Academic Programs (AAP) has been busy this year, growing its faculty, degree programs, and student enrollment under the leadership of Associate Dean for Graduate and Professional Programs Veronica Donahue, who joined the team in November 2018. Read about recent developments.

Our Faculty Are the Best of the Best!

This past year, our esteemed professors knocked it out of the park with the number of prestigious prizes and awards they received.

We recently welcomed six new Bloomberg Distinguished Professors to the Krieger School. That brings our grand total to 25! They collectively carry a broad swath of expertise and excellence that will have an impact on our students, our research, and the new knowledge we seek to create.

And the Winners Are…Our Students

Whether undergraduate or graduate, Krieger School students are involved in research that consistently breaks new ground and changes the world.

Much of the past year was spent working on identifying new ways to make sure our students succeed in all of their scholarly and student life pursuits.

Read about it on The Hub

Students speak with the Commission on Undergraduate Education about what they need to succeed.

The Krieger School’s social media platforms have yielded huge growth this year. We gained close to 3,000 new followers and 47,000 people engaged with our content. Give us a follow to see what all the buzz is about. 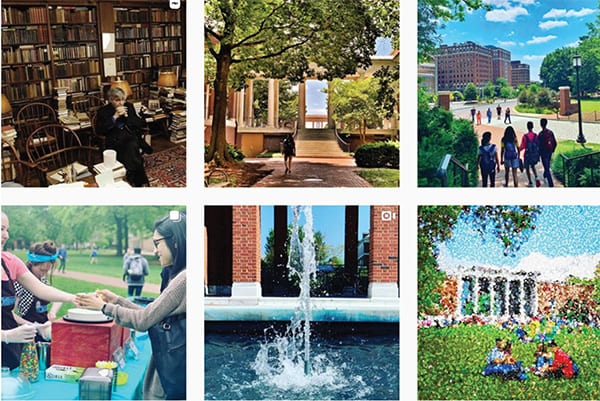