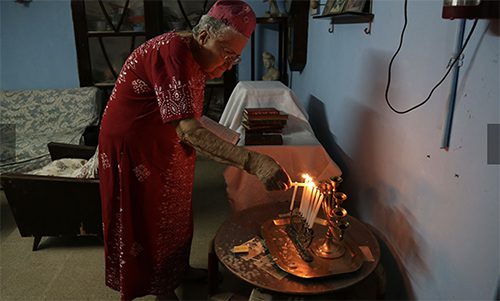 Join CAMS in April for a screening of the Hungarian documentary film, “The Missing Tale” (2022), by Klara Trencsenyi. Exact date and location will be announced in spring 2023. The film is part of the CAMS film series Films You Cannot See Anywhere Else, which highlights unique and important films with small, local distribution.

“The Missing Tale” only came out in Hungary with no international release, and has an important take on Jewish-Indian culture. The documentary addresses the question: “What happens when you grew up in a family that has been silent about its past and you suddenly find a guide to your roots on the other side of the planet?”

According to Trencsenyi, “For almost 2000 years there has been a flourishing Jewish community on Synagogue Lane in the South Indian city of Cochin. When I started to shoot this documentary, there were seven people left. Thousands of Cochini Jews migrated in the 1950s to the promised land of Israel leaving their ancestors behind in Cochini cemeteries.”

“Among the remaining ones, I came to discover my Jewish grandmother in the eldest Jewess of Cochin, Sarah Cohen. Once the backbone of the community, the 95-year-old matriarch was slowly losing her memory – thus the memory of the entire community was in danger. The film follows the efforts of three self-appointed “guardians” to carry on with the age-old heritage of Cochini Jews. One of them is a Muslim tailor, Thaha (45) who takes over Sarah Cohen’s embroidery of Jewish ritual cloths and tries to document the last moments of her life. The other one is Babu (60), the last guardian of a crumbling synagogue, whose life mission is to restore the building and the community rituals. The third one is a contemporary Israeli artist, Meydad (34) who comes to Cochin to paint the portrayal of deceased community members on the collapsing Jewish buildings. And during the shooting of this documentary, I have become the last guardian, entrusted by my “found grandmother” and her “found footage”, lots of personal archives, to tell the world about this community. But while doing so, I also tried to fill the gaps of my Eastern European identity with the heritage shared by this proud Jewess during the last days of her life.”