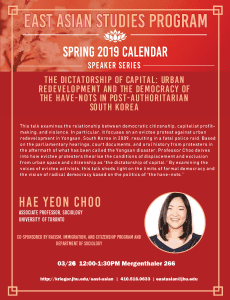 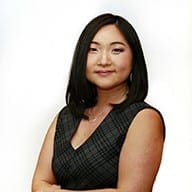 This talk examines the relationship between democratic citizenship, capitalist profitmaking,
and violence. In particular, it focuses on an evictee protest against urban
redevelopment in Yongsan, South Korea in 2009, resulting in a fatal police raid. Based
on the parliamentary hearings, court documents, and oral history from protesters in
the aftermath of what has been called the Yongsan disaster, Professor Choo delves
into how evictee protesters theorise the conditions of displacement and exclusion
from urban space and citizenship as “the dictatorship of capital.” By examining the
voices of evictee activists, this talk sheds light on the limits of formal democracy and
the vision of radical democracy based on the politics of “the have-nots.”