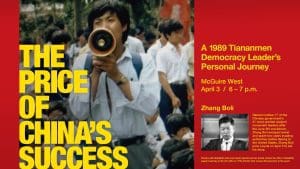 “At a time when the news discusses the U.S.-China trade war, the Chinese Communist Party’s brutal treatment of Uighur Muslims, harassment of Chinese Christians, human rights lawyers, and other activist groups, Zhang Boli’s personal story of the 1989 Tiananmen Square movement is very timely. On a grand scale, he tells it on the 30th anniversary of the largest democracy movement in the history of modern China. On a more personal level, his journey reflects how the June 4 crackdown was a watershed moment, as many Chinese became disillusioned with Chinese Communist Party rule.”

As a student at Peking University in 1989, Zhang was a leader in the Tiananmen Square student movement, serving in multiple leadership roles, such as executive member of the Beijing University Preparatory Committee, editor in chief of the student-published newspaper, deputy commander of hunger strikes, deputy of the Defend Tiananmen Square Headquarters, and president of the Tiananmen Square University of Democracy. Because of his extensive participation, he was named among the Chinese government’s 21 most-wanted student movement leaders. He spent two years evading arrest before fleeing to the United States, where he became a Christian pastor.

Zhang is the author of Escape from China: The Long Journey from Tiananmen to Freedom. He currently resides in Ontario, Calif., and leads a global network of churches.

The event is free and open to the public. The lecture will be translated live from Mandarin Chinese to English.

For more information, please contact Nadine Fenchak, program assistant in the department of history, at nfenchak@loyola.edu or 410-617-2326.