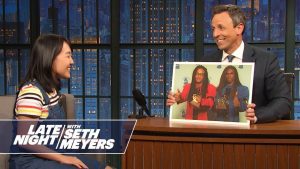 JHU’s Bachelor of Arts in Film and Media Studies is pleased to present television writer and comedian KAREN CHEE as a Visiting Artist! Ms. Chee is a Brooklyn-based writer-comedian who is currently a staff writer for Late Night With Seth Myers. She has been published in The New York Times, The Washington Post, and McSweeney’s. She does standup and recently also wrote jokes for the Golden Globe Awards! She’s been interviewed by Variety and Vulture, as well as listed as a top talent to watch in Entertainment Weekly. She also regularly appears in bits on Late Night when she talks to Seth and to the audience!

You can see many of these here: http://www.karenchee.com/watch

Saturday, April 11th, on Zoom, she will speak about her life in television, and provide answers to student questions in a Q&A on the industry, working in television, and her own career. This will be followed by a lengthy workshop on writing for late night television. Her workshop focuses on how to do monologue jokes for late night TV (this will include practicing writing set-ups, punchlines, punching up vs. down, types of jokes) and comedic sketches.