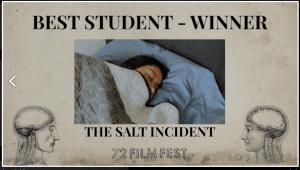 The film, “The Salt Incident“, by FMS Seniors Curtis and Thomas Nishimoto was awarded the “Best Student Film” award while also being nominated for “Best Cinematography”, “Best Under 5 Minutes” and “Best of the Fest.”

The 72 Film Fest is an annual time based film competition where teams have 72 hours to make a movie. Based just outside the DC/Baltimore metropolitan area in Frederick, MD- 72 Film Fest inspires and challenges filmmakers to create a movie based around a specific annual theme.  Prizes and Awards are given out in a variety of categories including Writing, Acting, Cinematography, Editing and more.  Over 500 films have been made for the Fest in the first 14 years.