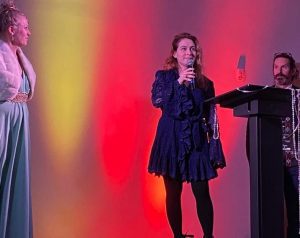 After ten years in prison, Kim, a 26-year-old Yup’ik woman and former champion musher, returns to her hometown of Bethel, Alaska. But freedom isn’t what she expected it to be. She struggles to reconnect with her younger sister Helen and adhere to the terms of her parole. So when she gets a job at a sled dog racing kennel run by the enigmatic and no-nonsense Ms. Tillie, she sees the potential in an abused dog and vows to race the Kuskokwim 300 again. Thrust back into a world that she thought she left behind, she must confront her past, try to deal with the trauma of her incarceration, and find a way to reclaim her identity.

The Anchorage International Film Festival’s mission is to develop, promote and sustain a film festival that supports new media and independent film making in Alaska and around the world while enriching cultural and entertainment opportunities for Alaskans.  More information can be found at anchoragefilmfestival.org.