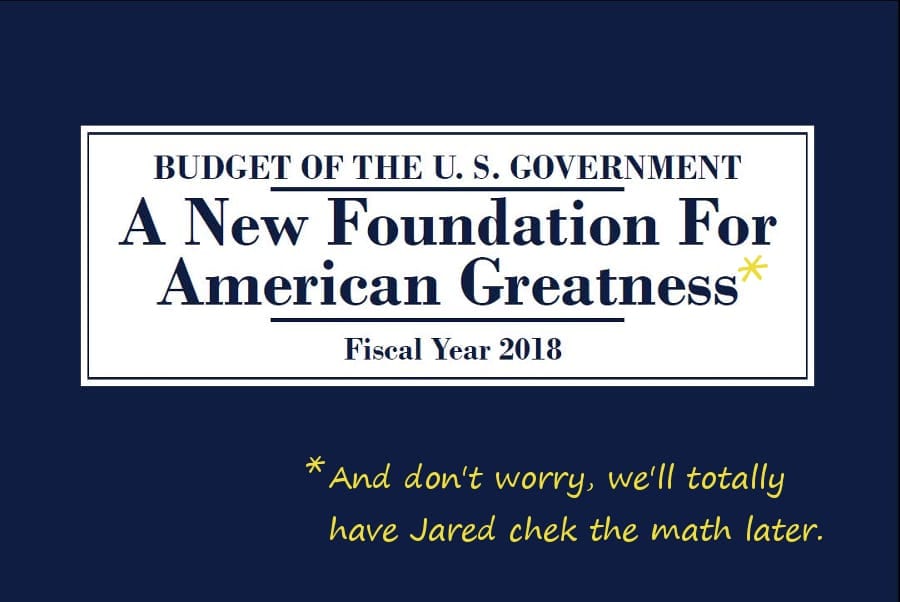 Since early 2014, we’ve been lamenting the fact that CBO has persisted in telling the same Armageddon budget story as it was telling 2009-2012, despite the fact that the deficit picture had dramatically improved. We mused aloud that if real debt problems did reappear, they might regret having spent several years crying wolf. If we are to take the Trump budget seriously, the wolf is now at the door.

Let us review this ongoing saga. The fiscal deficit in the U.S. ballooned in the aftermath of the financial crisis, but by 2013, tax increases and substantially lower health care cost increases led CBO and others to project much tamer primary deficits. Under reasonable assumptions, we argued, the new primary deficit picture implied a modest fiscal imbalance that could be resolved without dramatic policy changes.

The CBO, however, continued to forecast fiscal Armageddon, despite the improvement in primary deficits. Their mistake? Debt dynamics are driven by the primary deficit and r-g, the gap between real interest rates and real growth rates. In the March 2017 projections, CBO projected that the debt/GDP ratio would soar to 150 percent over the next 30 years, with primary deficits around 3.5 percent of GDP. This gloomy debt outlook owes to the CBOs implausible projection that real interest rates would rise back toward a historical norm of 2.4 percent, while real growth remained tepid at 2 percent.[1] With the all-important quantity r-g at +0.4 percent in this projection, interest payments grow faster than the economy and debt spirals out of control.

Happily, U.S. government real borrowing rates, on average over long periods, have been modestly below the real GDP growth rate in the U.S., with r-g averaging around -0.5 percent.[2] With a more plausible r-g, we argued, the primary deficits that CBO was projecting would imply a modest long-term imbalance that would require only moderate adjustments. Since leaving his post as CBO head, Doug Elemendorf is also making this argument.

That brings us to the Trump budget. We are not sure whether to take this budget seriously (or literally). All White House budgets contain gimmicks and sleight of hand, but the budget plan recently released by the Trump Administration is in a class all of its own. Despite the lack of details at present, it is shooting fish in a barrel to point out the many ways in which the plan is slipshod—e.g., despite repealing the inheritance tax on one page, inheritance tax revenues go up on another. The plan is also wildly unrealistic in assuming GDP growth of 3 percent. This growth rate is not outlandish compared to some historical periods, but those earlier periods did not have the demographic headwinds we are now battling-headwinds that get worse if immigration is further restricted.

At its core, however, the plan promises massive tax cuts, laid alongside spending cuts that are draconian in some areas, but that spare the largest cost-drivers—military, social security and Medicare. In any reasonable accounting this budget must balloon the primary deficit and for any reasonable r-g, those spiraling debt Armageddon projections become a serious issue.

The Trump budget, takes a page from the CBO in choosing an implausible r-g. Whereas the CBO has been assuming something like r-g of +0.4, the Trump budget offers up -1.5 percent—3 percent real growth with a real interest rate of 1.5 percent.[3] With growth exceeding interest rates by that implausibly large margin, the fiscal picture looks much brighter than any reasonable r and g pairing would suggest.

Our bottom line is that for a reasonable r-g, the long-term fiscal imbalance for the U.S. under current law is modest and could be dealt with by mature adults. The Trump budget appears, in stark contrast, to radically understate the likely implications for worsening the U.S. primary deficit and embeds an implausibly low r-g assumption. In combination, these two gaffs produce an outlook that radically understate the adverse debt dynamics that those deficits would likely entail. We expect CBO will make these points in the near future. And, r-g debates aside, we welcome the detailed and much fairer assessment of the primary deficit outlook that CBO will provide.