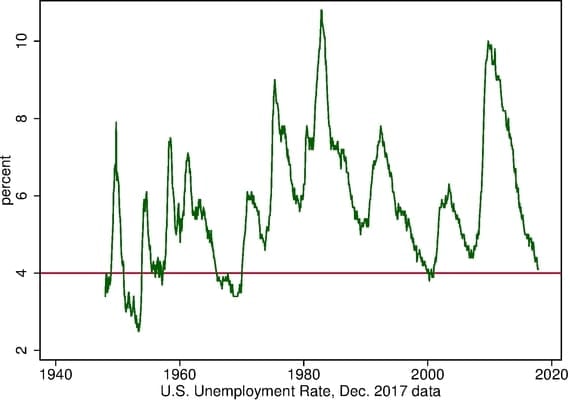 Eighteen months ago, in “Six Degrees of Separation between jobs and inflation,” we argued that job gains of 200,000 per month could easily continue for the next 18 to 24 months without providing significant upward pressure on inflation. Eighteen months are up, and as of today’s job report we’ve seen solid job growth of 187,00 per month, and inflation has been roughly unchanged on net.[1]

In the Six Degrees piece, we were not predicting strong job growth accompanied by flat inflation.[2] Instead, we presented plausible scenarios as a way to illustrate a fact that macroeconomists generally refuse to acknowledge: real-time assessments of slack very seldom have great value in forecasting inflation.[3] Myriad factors confound the relation between real-world measures of slack and inflation, and those factors regularly swamp the important, but weak jobs-to-inflation link. We don’t know exactly what accounts for flat inflation over the last 18 months, but rising prime age participation and switches from part time to full-time employment surely helped accommoate the strong labor market.

We are not saying economists are clueless about inflation. In particular, there is one bedrock principle that is widely accepted by mainstream economists: At some point if labor market tightening continues, climbing labor costs will come to dominate other factors and show through in rising inflation. For what it’s worth, we’re with the mainstream here. We part company, however, when, at any particular moment, folks add a forecaster’s folly: “Current labor market tightness will very soon result in higher inflation.”

It is very important to sharply distinguish confidence in the bedrock claim from skepticism about the second. Both the incoming and outgoing Fed Chairs, for example, have expressed consistent confidence in the bedrock principle while staying well clear of the folly. The FOMC says “We cannot be sure we have done enough to push inflation up,” and adds, “We’ll adjust policy until we have done enough.”[4]

So what about the next 18 months? Embracing the bedrock principle, and recognizing the substantial recent labor market tightening, we are confident that the economy is much closer to witnessing rising inflation than it was 18 months ago. Indeed, if we acknowledge that the economy likely will soon get a dose of fiscal stimulus, the prospects for rising inflation in the near term are even higher. Thus, our best guess is that we will see some firming of wage and price inflation. But there is still plenty of room for confounding dynamics in, say, energy markets or China, to further delay the rise.

What does this mean for monetary policy? Focusing only on inflation, the main implication is exactly what the FOMC has been saying: keep pushing until you get there. But this leaves plenty of room for discussing just how hard to push. And this issue, in turn, raises many questions about financial conditions. In light of tightening credit spreads and the stock market boom, just how accommodative is policy at present? Are we seeing signs of destabilizing excesses?

Thus, we think that inflation performance will fill in only a part of the mosaic that crystalizes FOMC thinking about policy in 2018. We’ll discuss this picture more fully in our upcoming December FOMC preview.

1. For example, from 2015Q2 to 2017Q3, core PCE inflation rose from 1.3 percent to 1.4 percent on a quarter-over-four-quarters-earlier basis. The change in headline measures is dominated by big moves in energy prices. Source: FRED. [back]

2. In fact, we were predicting solid jobs growth and a small rise in core inflation. [back]

3. This is part of Faust’s research with Jonathan Wright and others and is reviewed in Surely we’re behind some curve. [back]

4. This pair of statements can be found in virtually any official monetary policy communication over the last year or so, e.g., Powell’s confirmation hearing and Yellen’s November monetary policy testimony. [back]