President Trump has frequently pointed to the performance of the stock market in praising his own performance, although not in the past week when markets worldwide came down with (fears of) the coronavirus.

Even at the end of the market’s worst week since 2008, the S&P 500 has still risen at a compound rate of 9.2% per year since the end of 2016. That is not bad, although it comes nowhere close to the 12% annual gain registered under Trump’s predecessor, Barack Obama.

Presidents often do not deserve much of the credit, or blame, for stock market performance during their terms. President Bill Clinton, the top performer since World War II, benefitted from leaving office just as a boom was ending. His successor, George W. Bush, had the misfortune of a recession arriving soon after he took office, and then the financial crisis hitting near the end of his term. The market did quite well during the brief tenure of Gerald Ford, who entered office with share prices depressed by a severe recession.

Still, Trump deserves credit for some of the rises during his tenure. Massive fiscal stimulus – through tax cuts and spending increases – clearly helped push the economy higher. And his successful campaign to get the Federal Reserve to stop raising rates, as it had in 2018, and cut them last year, provided another push for the economy and the stock market.

That lowering of rates in 2019 was also accompanied by a short-term borrowing binge by companies with relatively poor credit. Torsten Slok, the chief economist of Deutsche Bank in the United States, notes that the average duration of bonds in one high-yield (a.k.a. junk) bond index has fallen to just over three years, which appears to be a record low.

Borrowing short yielded interest savings for those companies, but if the world economy does suffer declines brought on by plunging trade due to the virus, it could leave them in a vulnerable position, needing to refinance just as business slows and markets turn hostile.

And with the Federal Funds rate now at just 1.5-1.75%, the Fed would have little room to provide economic stimulus by reducing it – although Fed Chairman Jerome Powell did seek to calm markets Friday by saying “the fundamentals of the U.S. economy remain strong,” and promising the central bank would “act as appropriate to support the economy” if needed.

Investment grade companies, by contrast, have been lengthening maturities in order to lock in low borrowing costs. The average duration of a high-grade corporate bond index is now eight years. The difference between the two durations is a record, Slok says.

So far, the stock market performance under President Trump leaves him seventh of the 13 post-World War II presidents. The measurement is based on annualized performance of the S&P 500, not considering either dividends or inflation.

Still, not having a top stock market record might not be so bad. The five best presidencies since World War II – measured by performance of the S&P 500 – were those of Presidents Clinton, Ford, Obama, George Bush and Dwight Eisenhower. The White House changed parties after each of those administrations. 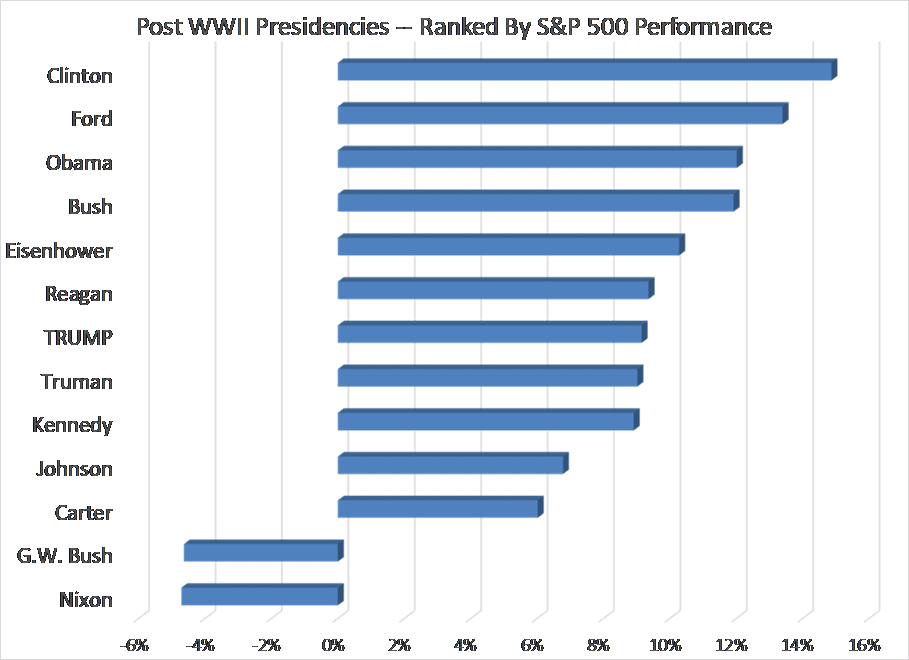 Figures are compound average gains, or losses, of the S&P 500 during each president’s term. Figures exclude dividends and are not adjusted for inflation. Each president is credited with performance from the end of the month before he took office though his last full month in office.

Floyd Norris is a fellow of the Center for Financial Economics at Johns Hopkins University, and a former chief financial correspondent of The New York Times.

Steeling Ourselves for Less Steel Use in China

Herbert Stein, former Chair of the U.S. Council of Economic Advisors for R.M. Nixon, reminded his colleagues that “if something cannot go on forever, it will stop”. History is littered […]

Has the US started to import inflation from Asia? by Melih Firat

Over the last 12 months, inflation has increased 5.4 percent in the US. Stoked by a leap for energy prices and a hefty 4.3 percent rise for core inflation. Throughout […]

Only Two Months of Pain? Not Even Close

The Pandemic recession lasted two months, the National Bureau of Economic Research decided this week—more than a year after the supposed end of the recession in April 2020.  That is […]