There are 50 states, but only 13 where the 2016 presidential election was decided by a margin of less than eight percentage points. Six of them went for Hillary Clinton and seven for Donald Trump. It is likely that this year’s election will be largely decided in those states.

So how are they faring in the current economic recession brought on by the coronavirus?

We looked at two measures. How likely are workers in those states to have been laid off in the past month? How many people have died from the virus?

Here is a table of those 13 states, with the proportion of the labor force that has filed for unemployment insurance since March 14 and the rate of COVID-19 deaths reported in each state. 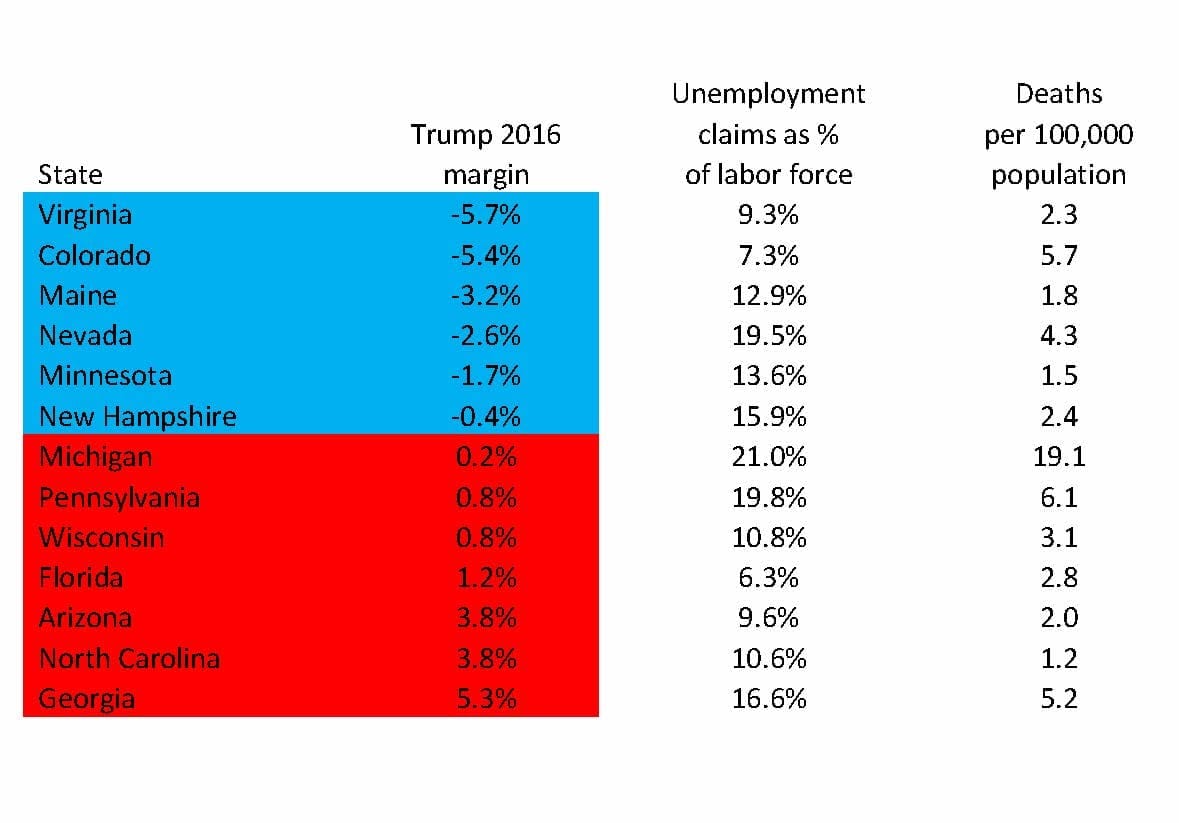 Two of those states stand out. Michigan has had 21% of its labor force file unemployment claims, and has a death rate of 19.1 people per 100,000 population.

Pennsylvania has a filing rate of 19.8%, which is fourth highest in the country, and a death rate of 6.1%. That rate is less than a third of Michigan’s but is higher than that of any other state on the list.

Those two states, along with Wisconsin – where both unemployment claims and deaths are significantly lower – were the three midwestern states in which Donald Trump scored narrow upset wins in 2016 to secure an electoral college majority despite losing the national popular vote.

To a significant extent, decisions on what to do now are being made – by the president, the governors and by individual citizens who will decide just how much they are willing to risk by forgoing social distancing – without good information.

But such information is not yet available, which leads some health experts to argue for caution in reopening the economy.

It is Michigan that has become a focal point of the current argument. It has fared badly until now, and Gov. Gretchen Whitmer, a Democrat, has ordered a fairly tight lockdown, sparking protests from people claiming that it violates their liberty. She dismissed a drive-in protest Wednesday, called “Operation Gridlock,” as “essentially a political rally.” Some demonstrators carried signs supporting President Trump.

Trump evidently thinks that a quick economic recovery is his best hope for re-election, and that to get that he needs to reopen as much of the economy as possible. Some health experts fear that doing that could lead to new concentrations of the disease, causing the death toll to rise sharply in areas that so far have had few fatalities.