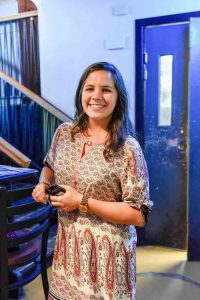 Emily Pastrana ’18, a double major in International Studies and Latin American Studies with minors in History and Entrepreneurship and Management, has been awarded a grant from the Brown Family Travel Fund to conduct research in Cuba this intersession.

Emily’s research, which will be the backbone of her senior thesis, focuses on fidelismo, the concept of using Christian values for purposes of supporting the legacy and values of the Cuban Revolution of 1959 by the Cuban government, headed by the Castro regime. These purposes included the promotion of social justice ideas and gaining compliance from the public as the government fundamentally restructured economic and political society.  While there are different interpretations of fidelismo across populations, Emily will be concentrating on the counter-revolutionary movements of the Catholic community in Cuba. Both ideas primarily focus on the aftermath of the Cuban Revolution of 1959 to the Cuban state’s official declaration as a communist state in 1961.  We wish Emily the best of luck with her research!