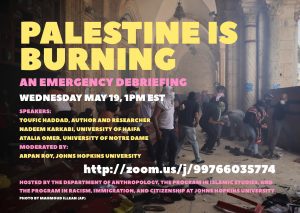 The Program in Islamic Studies is cosponsoring a virtual event on the recent emergency in Israel/Palestine. Discussants will offer a complex understanding on the bombing of the Gaza strip, and events leading up to it.

The Gaza Strip is currently undergoing heavy bombardment by Israel, causing many civilian casualties and infrastructural collapse. But the bombing of Gaza was precipitated by a complex unison of events over the last several weeks. Beginning with popular mobilizations in the Sheikh Jarrah neighborhood in Jerusalem, where several Palestinian families remain slated for state-mandated displacement from their homes, and spectacular Israeli military incursions into Muslim holy sites in the city, these tensions have now spread to the entirety of Israel/Palestine. Clashes between Palestinians and armed Israeli militias are occurring in the so-called “mixed cities” like Haifa, Jaffa, and Acre, as well as mass demonstrations in the Galilee, the Negev desert, the West Bank, and at the Jordanian border, where thousands of Palestinian refugees have been amassing in a potential Gandhian moment never before seen. This debriefing will contextualize and analyze the latest emergency in Palestine.

Toufic Haddad is the author of Palestine Ltd.: Neoliberalism and Nationalism in the Occupied Territories (I.B. Taurus 2016). He completed his PhD in Development Studies at SOAS, University of London. He lives in the Sheikh Jarrah neighborhood of Jerusalem where he directs a British research institute.

Atalia Omer is professor of Religion, Conflict, and Peace Studies at the University of Notre Dame. Her research touches on the interrelation between religion, ethnicity, and nationalism. She is the author of two books, the most recent of which is titled Days of Awe: Reimagining Jewishness in Solidarity with Palestinians (University of Chicago Press 2019).

Nadeem Karkabi teaches in the Department of Anthropology at the University of Haifa. His research focuses on Palestinian performative culture and on the interrelations of language, race, religion, and nationalism among Mizrahi Jews performing Arabic music in Israel.

Arpan Roy recently completed his PhD in the Department of Anthropology at Johns Hopkins University. His research is on Romani people in Palestine and Jordan, focusing on the place of kinship and settlement patterns in the construction of ethnicity.

This virtual event is sponsored by the Department of Anthropology, the Program in Islamic Studies, and the Program in Racism, Immigration, and Citizenship at Johns Hopkins University.