The Leonard and Helen R. Stulman Program in Jewish Studies 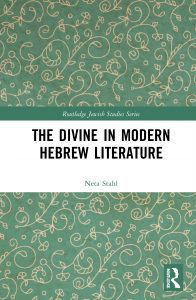 Demonstrating the pervasive presence of God in modern Hebrew literature, this book explores the qualities that twentieth-century Hebrew writers attributed to the divine, and examines their functions against the simplistic dichotomy between religious and secular literature.

The volume follows both chronological and thematic paths, offering a panoramic and multilayered analysis of the various strategies in which modern Hebrew writers, from the turn of the nineteenth century through the twenty-first century pursued in their attempt to represent the divine in the face of metaphysical, theological, and representational challenges. Modern Hebrew literature emerged during the nineteenth century as part of the Haskalah (Jewish Enlightenment) movement, which attempted to break from the traditional modes of Jewish intellectual and social life. The Hebrew literature that arose in this period embraced the rebellious nature of the Haskalah and is commonly characterized as secular in nature, defying Orthodoxy and rejecting God. Nevertheless, this volume shows that modern Hebrew literature relied on traditional narratological and poetic norms in its attempt to represent God. Despite its self-declared secularity, it engaged deeply with traditional problems such as the nature of God, divine presence, and theodicy.

Examining these radical changes, this volume is a key text for scholars and students of modern Hebrew literature, Jewish studies and the intersection of religion and literature.