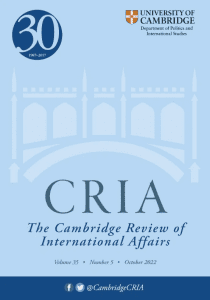 As the result of an international, interdisciplinary conference convened at Johns Hopkins by the Latin America in a Globalizing World Initiative, Dr. Christy Thornton (Assistant Professor, Sociology) and Dr. J. Luis Rodríguez (PhD 2021, Political Science) have published a special issue of the Cambridge Review of International Affairs: “The Liberal International Order and the Global South: A View from Latin America.”

The special issue brings together historians, sociologists, and political scientists to ask what Latin American experiences in different domains and historical periods can tell us about the Liberal International Order (LIO) as it now fractures and reconstitutes. The core argument among these essays is that, despite inherent contradictions and tensions, Latin American engagements with the LIO have attempted to level the playing field and prevent the reinforcement of existing international hierarchies. The contributions to this special issue demonstrate that Latin American actors were not mere norm-takers and passive supporters of the LIO. Latin American actors have often sought to hold the leaders of the LIO to their own promises. They have insisted that the rules of a rules-based order should apply not just to the poor, weak or indebted but to the rich, strong and powerful as well.

Special Issue: The Liberal International Order and the Global South: A View from Latin America
Cambridge Review of International Affairs 35, no. 5 (2022)