Welcome to the Spring 2023 iteration of the Johns Hopkins Latin America in a Globalizing World works in progress seminar. We are excited to feature presenters from Johns Hopkins and other nearby institutions to workshop papers that range from nineteenth-century Argentina to contemporary Baltimore. This term, our meetings take place on Thursdays from 2-4 pm in Gilman 308 and on Zoom. 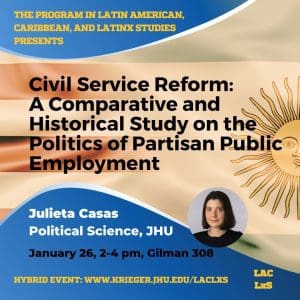 For our first meeting on January 26, we’re pleased to welcome Julieta Casas, Ph.D. Candidate from Political Science (JHU), to present:

Civil Service Reform: A Comparative and Historical Study on the Politics of Partisan Public Employment

Conventional wisdom posits that civil service reform results from economic modernization and politicians’ calculus for reelection. But why did civil service reform bills chronically fail to pass in South American congresses despite these favorable conditions? This paper argues that the type of patronage that countries are trying to leave behind with enacting a law is a critical explanatory factor in the process of success and failure of civil service reform. Some types of patronage are more conducive to reform than others because of the effects their firing practices set in motion. Self-liquidating patronage favors reform adoption because it features high numbers of firings of public employees after party turnover, generating clear losers motivated to rally for reform. Conversely, other types of patronage are self-preserving and foreclose the possibility of reform. Self-preserving patronage is characterized by low numbers of firings of public employees after party turnover, developing virtually no losers and having a demobilizing effect that leads to reform failure. This paper argues that self-preserving patronage was present in South American countries after the emergence of mass politics and explains the chronic failure of civil service reform bills introduced to Congress. Using a developmental approach to historical causal inference anchored in two case studies, the United States and Argentina, I show that firing patterns after party turnover in the nineteenth and early twentieth century are crucial for understanding civil service reform success and failure.

Please email Prof. Casey Lurtz (lurtz@jhu.edu) for a copy of the paper and the Zoom link.