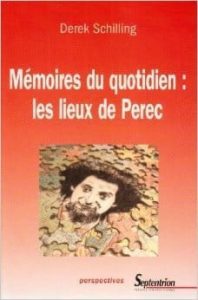 Surveying his own career in 1978 for the purposes of a short essay entitled “Notes sur ce que je cherche,” Georges Perec suggested that his work was animated by four major impulses. First, a sociological impulse, a will to examine everyday life; second, an autobiographical current; third, a ludic bent; and finally, an inclination toward narrativity, a desire to write the kind of books that one reads flat out on one’s bed. Even a casual reader of Perec will appreciate that those categories are not airtight, and that there is quite a bit of backing-and-forthing among them in the writer’s production. Nonetheless, they make a good deal of sense when they are taken to describe general directions in Perec’s writing. Among those four principal inclinations, the first has suffered with regard to the latter three in critical considerations of Perec since his death in 1982. In Mémoires du quotidien, Derek Schilling seeks to redress that, seeking also to recontextualize Perec’s work as an important link in a sustained debate on the nature of the quotidian in the second half of the twentieth century.

Help us improve this site

Please help us improve this website by taking an anonymous, 3-minute survey.