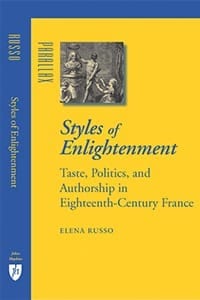 Styles of Enlightenment argues that alongside its democratic ideals and its efforts to create a unified public sphere, the Enlightenment also displayed a tendency to erect rigid barriers when it came to matters of style and artistic expression. The French philosophes tackled the issue of the hierarchy of genres with surprising inflexibility, and they looked down on those forms of art that they saw as commercial, popular, and merely entertaining. They were convinced that the standard of taste was too important a matter to be left to the whims of the public and the vagaries of the marketplace: aesthetic judgment ought to belong to a few, enlightened minds who would then pass it on to the masses.

Through readings of fictions, essays, memoirs, eulogies, and theatrical works by Fénelon, Bouhours, Marivaux, Montesquieu, Voltaire, Diderot, Rousseau, Mercier, Thomas, and others, Styles of Enlightenment traces the stages of a confrontation between the virile philosophe and the effeminate worldly writer, “good” and “bad” taste, high art and frivolous entertainment, state patronage and the privately sponsored marketplace, the academic eulogy and worldly conversation. It teases out the finer points of division on the public battlefields of literature and politics and the new world of contesting sexual economies.