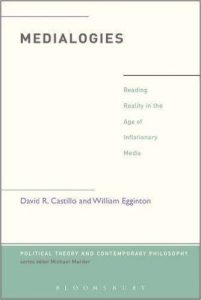 We are living in a time of inflationary media. While technological change has periodically altered and advanced the ways humans process and transmit knowledge, for the last 100 years the media with which we produce, transmit, and record ideas have multiplied in kind, speed, and power. Saturation in media is provoking a crisis in how we perceive and understand reality. Media become inflationary when the scope of their representation of the world outgrows the confines of their culture’s prior grasp of reality. We call the resulting concept of reality that emerges the culture’s medialogy.

Medialogies offers a highly innovative approach to the contemporary construction of reality in cultural, political, and economic domains. Castillo and Egginton, both luminary scholars, combine a very accessible style with profound theoretical analysis, relying not only on works of philosophy and political theory but also on novels, Hollywood films, and mass media phenomena. The book invites us to reconsider the way reality is constructed, and how truth, sovereignty, agency, and authority are understood from the everyday, philosophical, and political points of view. A powerful analysis of actuality, with its roots in early modernity, this work is crucial to understanding reality in the information age.