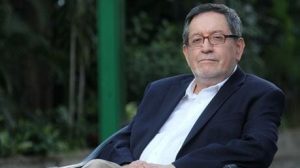 On Wednesday, December 6th, Julio Ortega, Professor of Hispanic Studies at Brown University, will deliver a lecture titled, “History and the Latin American Novel: The Cases of Gabriel García Márquez and Carlos Fuentes,” at 1 p.m. in Gilman 479. The lecture is free and open to the public.

Professor Ortega is an accomplished scholar, poet, playwright, and novelist. In 2015, he was named by esglobal as one of the 50 most influential Spanish and Spanish American intellectuals. His literary and scholarly work have received numerous prizes, including the Juan Rulfo Prize for Short Story and the Casa de América essay prize. Among his fifteen books are Transatlantic Translations: Dialogues in Latin American Literature (2006), Poetics of Change: The New Spanish-American Narrative (1984), and Gabriel García Márquez and the Powers of Fiction (1988). His most recent books include Ecuador cuenta (2014), Imagen y semejanza de Carlos Fuentes (2016) and the anthology Nuevo relato mexicano (2017). For the past two decades, Professor Ortega has organized the Trans-Atlantic Project at Brown University, an academic initiative and conference series that helped develop the scholarly field of “transatlantic studies.”