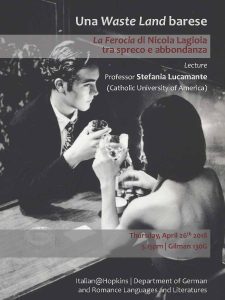 Nicola Lagioia’s 2015 La ferocia raises the question of how can waste and absorption be both paradoxically present in the construction of a novel that deals with family issues and an intense lack of moral values. This talk examines a novel, whose language at times struggles with the tough task of representing intense combinations of materic individual and communal waste. At first glance, the death of a woman conveys a story that is centered around a family and the business success of paterfamilias Vittorio Salvemini. The story reveals aspects that concern a more general and collective sense of physical and moral waste. The novel’s struggle is visible through its formal element, down to the most basic technical aspects of how the story is told, such as language to reach a crystalline form. The novel enacts the trauma felt by its characters out of their grief but also out of their foolish hubris.  The narrator’s ethical stance looms large in the complex structure of emotions and passions defined by this story set in the city of Bari, Puglia.

Stefania Lucamante is Professor of Italian and Comparative Literature and director of the Italian Studies Program at the Catholic University of America. Her main fields of research are representations of history, trauma, and memory in contemporary literature; familism and realism; the role of passions in literature.
She is the author of numerous volumes, including Forging Shoah Memories: Italian Women Writers, Jewish Identity, and the Holocaust (2014), Quella difficile identità: rappresentazioni letterarie dell’ebraismo e della Shoah (2012), A Multitude of Women: The Challenges of the Contemporary Italian Novel (University of Toronto Press, 2008), Elsa Morante e l’eredità proustiana (1998) and a monograph on Isabella Santacroce (Cadmo, 2002).

She also curated collections of essays such as Italy and the Bourgeoisie: The Re-Thinking of a Class (2009), and with Sharon Wood, Under Arturo’s Star: The Cultural Legacies of Elsa Morante, (2005) and Italian Pulp Fiction: The New Narrative of the Giovani Cannibali Writers (2001).

Dr. Lucamente is a contributor to several journals such as Quaderni d’Italianistica, Modern Language Notes e Italica, Poetiche,  and Leggendaria.