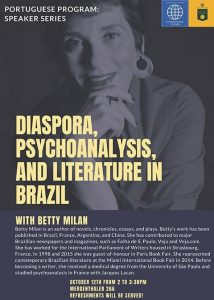 Join us from 2-3:30 p.m. on Friday, Oct. 12 for “Diaspora, Psychoanalysis, and Literature in Brazil” with Betty Milan. The event will take place in Mergenthaler 266 and refreshments will be served.

Betty Milan is an author of novels, chronicles, essays, and plays. Betty’s work has been published in Brazil, France, Argentina, and China. She has contributed to major Brazilian newspapers and magazines, such as Folha de S. Paulo, Veja and Veja.com. She has worked for the International Parliament of Writers housed in Strasbourg, France. In 1998 and 2015, she was guest-of-honor in Paris Book Fair. She represented contemporary Brazilian literature at the Miami International Book Fair in 2014. Before becoming a writer, she received a medical degree from he University of São Paulo and studied psychoanalysis in France with Jacques Lacan.