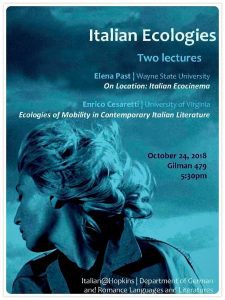 “On Location: Italian Ecocinema” by Elena Past, Wayne State University

“On Location: Italian Ecocinema” theorizes how practices of film production, from sound recording to location scouting to managing a production, can help interpret a film and its relationship to vibrant places and nonhuman actors. Guided by material ecocriticism’s recognition of the world’s lively agency, I read films in terms of pressing environmental questions: cinema’s dependence on hydrocarbons and its significant (sometimes toxic) waste stream, its use of nonhuman animals, and more generally our reliance on the more-than-human world. Beyond reading film narratives, however, an ecocinema approach entails unraveling the agentic networks on set and on screen to rethink and reframe the nonhuman actors who have often only had a marginal role in film scholarship. I propose asking new questions about how and what films signify, and urge that we should wonder whether different kinds of actors—not just human actors—can provide some answers.

Elena Pastis Associate Professor of Italian and Associate Chair of the Department of Classical and Modern Languages, Literatures, and Cultures, at Wayne State University in Detroit, Michigan. Her research includes work on the toxic waste crisis in Naples, Mediterranean cinema and ecocinema, and Italian crime fiction and film. Her book, Italian Ecocinema Beyond the Human, is due out in March with Indiana University Press.She co-edited Landscapes, Natures, Ecologies: Italy and the Environmental Humanities with Serenella Iovino and Enrico Cesaretti, and Thinking Italian Animals: Human and Posthuman in Modern Italian Literature and Film with Deborah Amberson.

In the years after the so-called “economic boom” in the 1960s, even the picturesque immobility of several, initially less affected areas in Italy (i.e. rural, agricultural, mountainous) progressively vanished. It was displaced by a construction frenzy that eventually covered thousands square kilometers of territory with asphalt and cement. Informing this transformation was (also) the desire of substituting what geographer Tim Cresswell calls a “sedentarist metaphysics” often associated with primitive, unsophisticated and old-fashioned attitudes, with a modern one infused by a rhetoric of sustainable development in which mobility played a central role.

Equally inspired by a recent issue of ISLE(June 2017) dedicated to the “ecologies of mobility” which considers the ways in which various modes of mobility may “devalue, distort, or destroy the natural world” or, alternatively, “‘truly and livingly’” encounter and know that world” (Withers 2017, 73), by Creswell’s idea that the study of mobility should go hand in hand with the analysis of the politics and materialities(my italics) attached to movement, and by current discourses in the field of environmental justice, my presentation examines from an ecomaterialist perspective two areas in the Italian peninsula which have been significantly affected by controversial constructions and/or expansions of large transport infrastructures.

These are the Mugello, the historic, pre-Apenninic area north of Florence bordering the region of Emilia Romagna, as it emerges in Simona Baldanzi’s book Mugello Upside Down. Orange Overalls in the Building sites of the Great Works (2011), and the Southern region of Calabria in cultural anthropologist Mauro F. Minervino’s “road narrative” State Road 18(2010).

In spite of their geographical distance and cultural differences, these two places and “material texts,” (Mugello and Calabria), have been transformed and similarly “offended” by an avalanche of cement and asphalt. These substances might thus be considered both as “vibrant” (Bennett 2010) agents of environmental degradation that have submerged pre-existing landscapes, and as concrete examples of those “materialities attached to movement” mentioned by Cresswell.

Ultimately, I suggest, Baldanzi’s and Minervino’s awareness-raising and ethically informed narratives function as “a sensorium for what goes wrong in a society” (Zapf 2016, 91), and may in turn constitute a marginal, yet inspiring vehicles for changing cultural attitudes and priorities.

Enrico Cesaretti is Associate Professor of Italian Studies at the University of Virginia.

His research and publications so far have been mostly dealing with modern and contemporary Italian literature and culture and focusing, in particular, on Italian Modernism and the Avant-garde. Recently, he co-edited with Serenella Iovino and Elena Past Italy and the Environmental Humanities: Landscapes, Natures, Ecologies (UVA Press 2018). He recently completed an initial draft of a new manuscript entitled Telling Matters: Narratives of Environmental Entanglements in Modern Italy. This project, located at the juncture of Italian Studies and ecocriticism, explores the narrative eloquence of (some of) the materials (sulfur, concrete, steel, asbestos, marble, petroleum) that, in their interaction with human beings’ own corporality, agency and imaginative stories, contributed to the making (and simultaneously the “un-making”) of today’s Italy.