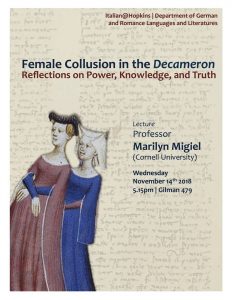 Giovanni Boccaccio’s Decameron offers four novellas that involve female collusion. In this paper, I focus on the first of these, Dioneo’s story about the wife of Mazzeo della Montagna. Setting the baseline for questions that we might ask about female collusion, I show how Decameron 4.10, which features a female servant in a significant role, invites us to consider the possibilities for women’s collaborative knowledge, to reflect on how power is distributed across class lines, and to recognize how truth and fiction-making are intertwined.

Marilyn Migiel  is professor of Romance Studies in the Department of Romance Studies at Cornell. Migiel received her A.B. in Medieval Studies (as an independent major) from Cornell University in 1975 and her Ph.D. in Italian Language and Literature from Yale University in 1981. Prior to joining the Cornell faculty in 1987, she taught Italian language and literature at Yale.

Having benefited immensely from her undergraduate study with Cornell faculty who were outstanding teachers and scholars, Migiel is deeply committed to undergraduate education.

While Migiel teaches and works on a wide array of texts and authors from the Italian Middle Ages to the present day, she is known primarily for her feminist readings of medieval and Renaissance Italian literature. Her best-known publication is A Rhetoric of the “Decameron,” which received the MLA’s 2004 Howard R. Marraro Prize for outstanding scholarship in Italian. Her book, The Ethical Dimension of the “Decameron,” was published by the University of Toronto Press in 2015 and received the MLA’s 2016 Howard R. Marraro Prize. In her recent and ongoing research, Migiel is especially interested in how literary works engage us in reflection about our ethical choices.