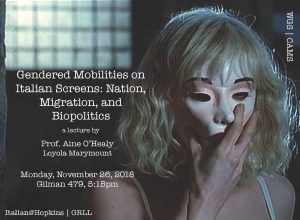 Since the early 21st century Italian filmmakers have increasingly concerned themselves with narratives of female migration both from the former Eastern bloc and the global South. Investigating cinematic stories of immigration that generally play out between native Italian men and immigrant women, this talk identifies the kinds of utility or disposability that such women represent in the Italian social imagination in recent years. While early Italian films made about migrant women routinely depicted them as involved in low-paid domestic labor, sex work, or sex trafficking, this pattern has shifted to some degree in recent years. Offering more ambivalent, open-ended conclusions than the films on migrant women produced elsewhere in Europe, the Italian films suggest a preoccupation with the reproduction of whiteness in a social landscape marked by diminishing birthrates and re-accelerated emigration.

Áine O’Healy is Professor of Modern Languages and Literatures at Loyola Marymount University. Her research interests lie in transnational cinema, Italian screen studies, and migration studies. Her recently completed book, Migrant Anxieties: Italian Cinema in a Transnational Landscape, will be published by Indiana University Press on March 1 2019. She is also the author of a monograph on Cesare Pavese, and has co-edited several special issues, including the recent “Moving Images” for California Italian Studies (2017). With Kataryna Marciniak and Aniko Imre she edited the collection Transnational Feminism in Film and Media for Palgrave in 2007, and with the same collaborators she current co-edits the Global Cinema book series for Palgrave.