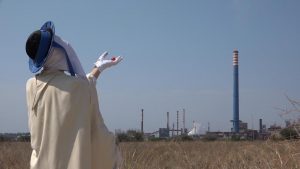 In the spring of 2017, I designed a new undergraduate film class as part of my research in environmental humanities:  Ecocinema: Framing Italy’s Environmental Crisis.  I assembled a substantial collection of Italian films dealing with environmental issues from the 1960s to the present, but, as usual, I had to exclude several good films because they did not have English subtitles.

While conducting research for the course, I came across Roberto Marsella and Grace Zanotto’s Non perdono (I Don’t Forgive, 2016), a compelling documentary about the environmental disaster taking place in the impoverished southern city of Taranto, home of the steel plant, Ilva.

The film had been screened at the Museum of Contemporary Art of Rome, but had very limited circulation. As I am interested in the aesthetics of environmental cinema and the narrative strategies filmmakers use to convey ecological values, I found this film particularly interesting and different from other environmental films; I wanted to share it with my students.

I soon discovered, however, that a subtitled version of the film did not exist. When I reached out to filmmaker and environmental activist Grace Zanotto, she told me, “Our film was shot with no budget. We don’t have money for it.” This sparked my idea of engaging undergraduate Italian majors enrolled in the class (who at the time were also enrolled in advanced Italian) as well as graduate students, in a collaborative translation and subtitling project. It was clear this could be a great opportunity for them to work on their linguistic and cultural skills while also allowing Non perdono to broaden its audience reach, thereby spreading awareness about Taranto’s situation.

When I found out that Professor Monica Seger from the College of William & Mary, who had conducted extensive research on the city of Taranto, was also interested in this film, we decided to join forces.

Osiris Mancera, senior JHU student majoring in Italian, Latin American Studies, and Medicine, Science and the Humanities, enthusiastically took on a leading role. She coordinated with her fellow students, Laura Bou Delgado and Emily Weinberg, as well as William & Mary students Zoe Nelson and Sheila Williams-Morales. Here is her reflection on the experience: “Working on this translation project with peers was such a rewarding learning experience. It is eye-opening realizing how marginalized some groups of people are kept and how unjustly they have been treated. In addition to broaden my knowledge of environmental issues and learn to approach film in a different way, this project also allowed me to garner some technical skills, becoming well-versed in software like Premiere Pro while gaining an understanding of the film production and editing process. This project also inspired me to seek further experience in translation, leading me to work on translating website content into English, Spanish and Portuguese during my semester-long internship in Rome, last spring. It is rewarding to think that our translation project helped people to become aware of environmental injustices faced around the world.”

PhD students Audrey Fastuca and Victoria Fanti helped oversee the project and conducted translation sessions: “We were very impressed with the undergraduate students who contributed to this challenging project.  It was heartening to see how the implications of the Ilva disaster in Taranto–and its very real, very lethal consequences–struck a chord with undergraduates, who grappled with translating often difficult, conversational  Italian–and often came out on top. The real-world significance of the crisis depicted in the documentary film enabled them to engage with a project that fell outside of the bounds of ‘traditional’ language study, but that was—for all of us—exceptionally instructive, impactful, and honest with regard to just one of the diverse challenges faced by Italian citizens today.”

After Professor Seger and I revised the translations this past summer, the filmmakers uploaded English subtitled version of Non perdono to YouTube. We also shared the project with other colleagues in the field when we participated together on a roundtable at the 2018 conference of the American Association for Italian Studies. As ecoscholars, we hope our work will demonstrate how teaching can be a form of environmental activism