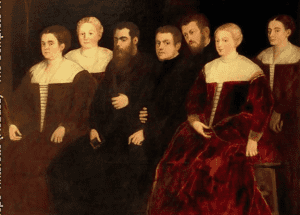 What Do Emotions Have To Do With a Will? The Last Testament of Aurelio Barbieri (Bologna, 1597). A lecture by Professor Monica Calabritto (The Graduate Center, CUNY). February 26, Gilman 130G, 5:15 pm.

In 1588 Paolo Barbieri, a wealthy Bolognese aristocrat, brutally murdered his young wife, Isabella Caccianemici, stabbing her seven times. As she lay dying, Paolo fled the city with Francesco, a servant in his employ. A few days later, Francesco wrote a desperate letter to Paolo’s brother, Aurelio, claiming that his master was mad. So began a dramatic trial at the end of which Paolo was condemned as a cold-blooded killer who deserved to pay the ultimate price for his crime, death by beheading. Paolo, who had escaped, ended up in a hospital for mad people in Milan, where he lived for many years. In 1598 Paolo was allowed to go back to Bologna, where he died in 1606, living mostly in a room by himself.

Paolo’s family was dramatically affected by the sentence, financially and emotionally. In 1597 his brother Aurelio died in Rome, apparently worn out by the financial problems directly and indirectly caused by Paolo’s murder of Isabella, and estranged from his mother Ippolita, who died shortly after him, and his sister Diana. In his will, Aurelio left all his property to a religious institution in Rome, a decision that his sister Diana, through her husband Valerio, contested and eventually won.

Three major categories, which occur rather frequently in the delineation of kinship in Italian family households, are important in this story: inheritance, wills, and dowries. Three episodes related to the aftermath of Paolo’s murder and insanity will exemplify these categories: the shared inheritance between brothers, the restitution of dowry after the death of one’s mother or wife to their families of origin, and the will composed by a male family member without a male heir. This presentation offers a glimpse into the complex network of emotional and social ties that existed among the members of the Barbieri family by interpreting a testament and the ensuing legal dispute. These legal documents also raise questions concerning family and gender issues in sixteenth-century Bologna.

Monica Calabritto received her “Laurea” degree in Classics at the Università degli Studi di Pisa and her Ph.D. in Comparative Literature, with a specialization in Renaissance Studies, from the Graduate Center of the City University of New York. In 2004-2005 she was the recipient of a one-year fellowship at Villa I Tatti (Harvard University), in Florence. She is the director of the Italian Specialization at the Graduate Center, CUNY. Her research focuses on the interaction between medicine and literature and between medicine and law in early modern Italy and Europe, as well as on the relation between visual and verbal media in early modern European culture. She co-edited with Peter Daly a collection of essays entitled Emblems of Death in the Early Modern Period, published by Droz in 2014, on emblems and imprese of death produced in Europe between the sixteenth and the eighteenth centuries. She is the author of the introduction to the first modern English translation, by John Crayton and Daniela Pastina, of Tomaso Garzoni’s The Hospital of Incurable Madness (Arizona Center for Medieval and Renaissance Studies, 2009) and of numerous essays, articles, and encyclopedia entries on Italian literature of the Renaissance and the Reformation—in particular, the relationship between literature and medicine in literary and medical texts, the structure and function of various medical genres vis-à-vis early modern melancholy, early modern criminal madness and violence. Her presentation is part of her manuscript book entitled “The Madman, the Evidence and the ‘Truth:’ Law, Medicine, and Vernacular Narrative in Early Modern Bologna.”