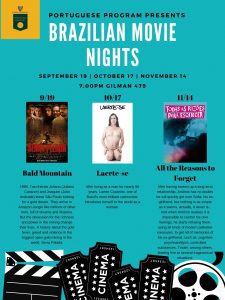 Bald Mountain
Sept. 19
1980. Two friends, Juliano (Juliano Carazzé) and Joaquim (Júlio Andrade), leave São Paulo looking for a gold dream. They arrive in Amazon Jungle like millions of other men, full of dreams and illusions. But the obsession for the richness and power in the mining change their lives. A history about the gold fever, greed, and violence in the biggest open gold mining in the world, Serra Pelada.

Laerte-se
Oct. 17
After living as a man for nearly 60 years, Laerte Coutinho, one of Brazil’s most brilliant cartoonists, introduces herself to the world as a woman.

All the Reasons to Forget
Nov. 14
After breaking up with his long-term girlfriend Sofia, Antônio believes he will quickly get over his ex-girlfriend. However, nothing is as simple as it seems. When Antônio realizes it is impossible to control his own feelings, he starts refusing them. He uses all kinds of modern palliative measures to get rid of memories of his ex-girlfriend, such as: cognitive psychoanalysis, controlled substances, Tinder, and others, leading him to several tragicomical situations.