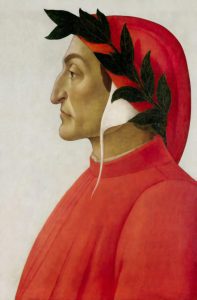 The copy of the Divine Comedy with the commentary by Cristoforo Landino, published in Venice by Pietro Piasi in 1491 and preserved in the House of Dante in Rome, presents a rich apparatus of annotations and painted figures that illustrate the salient passages of the poem. The dense mystery that has surrounded for a long time the author of the figures has been dissolved only in recent years, and it brought out the figure of Antonio Grifo, a Venetian poet and courtier who lived in the last years of the fifteenth century in Milan, in the refined environment of the court of Ludovico il Moro. Grifo is remembered for his friendship with Leonardo and for his work as a lyric poet and commentator of the works of Dante.

Luca Marcozzi is Associate Professor of Italian Literature at the University of Roma Tre. His research focuses on the classical legacy in Italian literature, in terms of rhetoric, use of mythology, poetics. Among his books and essays: Petrarca lettore di Ovidio (2001), La biblioteca di Febo (2002), Petrarca platonico (2011), the entry The making of Canzoniere in the Cambridge Companion to Petrarch (2015). He also authored with Francisco Rico the entry on Petrach for the Dizionario Biografico degli Italiani 2015. He published several essays on Dante’s lyrical poetry and the Divine Comedy, focusing on rhetoric (he edited the volume Dante e la retorica, 2017), its relationship with the classics, and figurative commentaries; his Dante e il mondo animale (edited with Giuseppe Crimi, 2013) won the Lombroso Prize. More recently, he focused on Renaissance literature, namely on Pietro Bembo and his cultural profile (he published the volume Bembo in 2017). He is also the co-director of the journal “Petrarchesca” and of the series “Dulces musae” by Aracne. In 2013 he taught at Notre Dame University as the Fulbright Distinguished Chair.