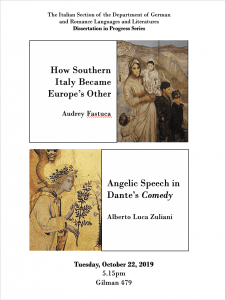 HOW THE SOUTH OF ITALY BECAME EUROPE’S “OTHER”

This chapter closely examines the construction of the Southern stereotype as Europe’s “other” and charts the evolving perspectives on rural Southern people as expressed in literature, history, and other cultural reproduction before and after the Unification.  Throughout a century of changing attitudes, several polarizing theories have been highly influential in shaping the image of the South. From 19th century sociologist Cesare Lombroso who claimed that the South was “biologically inferior,” to Antonio Gramsci’s groundbreaking treatise The Southern Question of 1926, and the fascist propaganda to reclaim farmland between the two world wars -much has been said about Southern Italy.  I compare these concepts to Carlo Levi’s Cristo si è fermato a Eboli composed while the author was exiled to Basilicata by Mussolini in 1937.  The chapter provides a framework from which to examine the geophilosophies of the “neomeridionalisti” who emerged in the 1980-1990s.  Lastly, they allow us to postulate broader questions such the loss of rural tradition and its relation to the climate crisis, and the rise of the Lega Nord in the South of Italy.

Audrey Fastuca is a Ph.D. candidate in Italian at Johns Hopkins University where her research is guided by Professor Laura Di Bianco.  Her dissertation is titled World Not Lost: Sounds, Identity, and Representation of Southern Rural Populations in 20th Century Literature and Cinema and explores the representations of the rural South in Levi’s Cristo si è fermato a Eboli, the poetry of Rocco Scotellaro, the documentary films of Vittorio de Seta and other postwar documentaries, and the ethnographies of Southern ritual by anthropologist Ernesto de Martino.  The project blends historical theory on the South with contemporary philosophical and sociological inquiries on Southern Italy by the “neomeridionalisti” such as the Franco Cassano and Piero Bevilacqua.  During her years at Johns Hopkins, she taught Italian 1 and 2, and several Freshman seminar courses on Southern Italian cultural history. This semester she is honored to teach the department’s Introduction to Italian Modern Literature course.  Before graduate school, Audrey led study abroad programs in the Naples and Pompeii area for the University of Rhode Island, Canisius College, and Johnson and Wales University (among others) for nearly 10 years.

Angelic speech is ubiquitous in Dante’s Divine Comedy, from canto 9 of the Inferno to the last cantos of the Paradiso. Together with demonic speech, it represents the only otherworldly language which is not spoken by human souls – being both God and Satan, instead, completely silent. Yet, what is the ontological status of this kind of otherworldly language in the Comedy? How does it relate to God’s Word – with the capital W? And more importantly still: what role does it play in Dante’s understanding of the divine? My paper will address these questions by focusing on both specific passages from the Divine Comedy and the overall development of angelic language in Dante’s work.

Alberto Luca Zuliani is a PhD candidate in Italian Studies at Johns Hopkins University. His research interests range from Renaissance literature and the limits of its poetics to twentieth-century poetry and Italian political cinema. He is currently working on his PhD dissertation which focuses on the literary implications of the rendition of God’s direct speech in Renaissance epics. His dissertation – entitled “A Talkative God. Poetry and Divine Word from Dante to Milton” – deals with the treatment of the divine word in the works of Dante, Ariosto, Sannazaro, Tasso, and Milton.

Help us improve this site

Please help us improve this website by taking an anonymous, 3-minute survey.