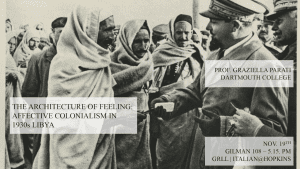 Italo Balbo is globally known as an aviation pioneer, but he was also the governor of Libya from 1934 to 1940. Graziella Parati is interested in analyzing a particular document that he wrote in which Balbo employed the language of affect in order to list the Italian “achievements” in its fourth shore, Libya. Once he become governor, he was interested in the “wellbeing” of natives. But, what does mean? Who is he talking to in his “Fascist Social Politics toward the Arabs in Libya”? Why does he call Italy an “Islamic Country”? In this paper Parati will also present Alessandro’s Spina’s response to Balbo’s treaty on Libya and try to establish a dialogue that is missing in the literature about Libya.

Graziella Parati is  Paul D. Paganucci Professor of Italian Literature and Language with joint appointments in Comparative Literature and Women’s Gender and Sexuality Studies. She specializes in Italian multiculturalism and migrations studies. Some of her most recent books include The Cultures of Italian Migration (2011), New Perspectives in Italian Cultural Studies (2012), Italy and the Cultural Politics of WWI (2016) and Migrant Writer and Urban Space in Italy: Proximities and Affect in Literature and Film (2017).