This anthology provides a panoramic view of fifteenth-century Florence in the words of the city’s own citizens and visitors. The fifty-one selections-many translated into English for the first time-offer fascinating glimpses into Renaissance thought. Together, the documents demonstrate the social, political, religious, and cultural impact Florence had in shaping the Italian and European Renaissance, and they reveal how Florence created, developed, and diffused the mythology of its own origins and glory.The documents point up the divergences in quattrocento accounts of the origins of Florence, and they reveal the importance of the city’s economy, social life, and military success to the formation of its image. The book includes sources that elaborate on the city’s accomplishments in literature and the visual arts, others that present major trends in Florentine religious life, and still others that attest to the acclaim and admiration that Florence evoked from foreign visitors. The editors also provide an informative introduction, a detailed chronology of fifteenth-century Italy, maps, photographs, an annotated bibliography, and a biographical sketch of the author of each document. 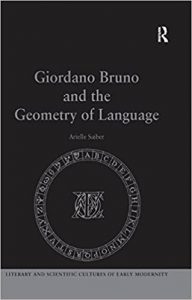 Giordano Bruno and the Geometry of Language brings to the fore a sixteenth-century philosopher’s role in early modern Europe as a bridge between science and literature, or more specifically, between the spatial paradigm of geometry and that of language. Arielle Saiber examines how, to invite what Bruno believed to be an infinite universe-its qualities and vicissitudes-into the world of language, Bruno forged a system of ‘figurative’ vocabularies: number, form, space, and word. This verbal and symbolic system in which geometric figures are seen to underlie rhetorical figures, is what Saiber calls ‘geometric rhetoric.’ Through analysis of Bruno’s writings, Saiber shows how Bruno’s writing necessitates a crafting of space, and is, in essence, a lexicon of spatial concepts. This study constitutes an original contribution both to scholarship on Bruno and to the fields of early modern scientific and literary studies. It also addresses the broader question of what role geometry has in the formation of any language and literature of any place and time. 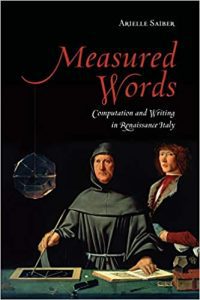 Measured Words explores the rich commerce between computation and writing that proliferated in fifteenth- and sixteenth-century Italy. In this captivating and generously illustrated work, Arielle Saiber studies the relationship between number, shape, and the written word in the works of four exceptional thinkers of the time: Leon Battista Alberti, Luca Pacioli, Niccolò Tartaglia, and Giambattista Della Porta.

Although these Renaissance humanists came from different social classes and practised the mathematical and literary arts at varying levels of sophistication, they were all guided by a sense that there exist deep ontological and epistemological bonds between computational and verbal thinking and production. Their shared view that a network or continuity exists between the literary arts and mathematics yielded extraordinary results, from Alberti’s treatise on cryptography and Pacioli’s design calculations for the Roman alphabet to Tartaglia’s poetic solutions of cubic equations and Della Porta’s dramatic applications of geometry. Through lively, cogent analysis of these and other related texts of the period, Measured Words presents, literally and figuratively, brilliant examples of what interdisciplinary work can offer us. 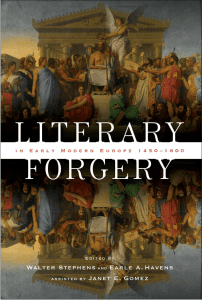 Forgery is an eternal problem. In literature and the writing of history, suspiciously attributed texts can be uniquely revealing when subjected to a nuanced critique. False and spurious writings impinge on social and political realities to a degree rarely confronted by the biographical criticism of yesteryear. They deserve a more critical reading of the sort far more often bestowed on canonical works of poetry and prose fiction.

The first comprehensive treatment of literary and historiographical forgery to appear in a quarter of a century, Literary Forgery in Early Modern Europe, 1450–1800 goes well beyond questions of authorship, spotlighting the imaginative vitality of forgery and its sinister impact on genuine scholarship. This volume demonstrates that early modern forgery was a literary tradition in its own right, with distinctive connections to politics, Greek and Roman classics, religion, philosophy, and modern literature. The thirteen essays draw immediate inspiration from Johns Hopkins University’s acquisition of the Bibliotheca Fictiva, the world’s premier research collection dedicated exclusively to the subject of literary forgery, which consists of several thousand rare books and unique manuscript materials from the early modern period and beyond.

The early modern explosion in forgery of all kinds—particularly in the kindred documentary fields of literary and archaeological falsification—was the most visible symptom of a dramatic shift in attitudes toward historical evidence and in the relation of texts to contemporary society. The authors capture the impact of this evolution within many fundamental cultural transformations, including the rise of print, changing tastes and fortunes of the literary marketplace, and the Protestant and Catholic Reformations. 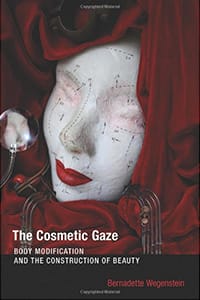 If the gaze can be understood to mark the disjuncture between how we see ourselves and how we want to be seen by others, The Cosmetic Gaze— in Bernadette Wegenstein’s groundbreaking formulation—is one through which the act of looking at our bodies and those of others is already informed by the techniques, expectations, and strategies (often surgical) of bodily modification. It is, Wegenstein says, also a moralizing gaze, a way of looking at bodies as awaiting both physical and spiritual improvement. In The Cosmetic Gaze, Wegenstein charts this synthesis of outer and inner transformation. Wegenstein shows how the cosmetic gaze underlies the “rebirth” celebrated in today’s makeover culture and how it builds upon a body concept that has collapsed into its mediality. In today’s beauty discourse—on reality TV and websites that collect “bad plastic surgery”—we yearn to experience a bettered self that has been reborn from its own flesh and is now itself, like a digitally remastered character in a classic Hollywood movie, immortal. Wegenstein traces the cosmetic gaze from 18th-century ideas about physiognomy through television makeover shows and facial-recognition software to cinema—which, like our other screens, never ceases to show us our bodies as they could be, drawing life from the very cosmetic gaze it transmits. 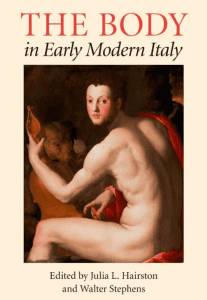 Human bodies have been represented and defined in various ways across different cultures and historical periods. As an object of interpretation and site of social interaction, the body has throughout history attracted more attention than perhaps any other element of human experience. The essays in this volume explore the manifestations of the body in Italian society from the 14th through the 17th centuries.

Adopting a variety of interdisciplinary approaches, these fresh and thought-provoking essays offer original perspectives on corporeality as understood in the early modern literature, art, architecture, science, and politics of Italy. An impressively diverse group of contributors comment on a broad range and variety of conceptualizations of the body, creating a rich dialogue among scholars of early modern Italy. 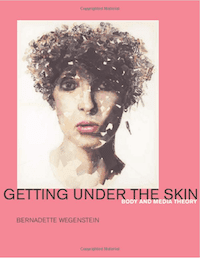 The body as an object of critical study dominates disciplines across the humanities to such an extent that a new discipline has emerged: body criticism. In Getting Under the Skin, Bernadette Wegenstein traces contemporary body discourse in philosophy and cultural studies to its roots in 20th-century thought—showing how psychoanalysis, phenomenology, cognitive science, and feminist theory contributed to a new body concept—and studies the millennial body in performance art, popular culture, new media arts, and architecture. Wegenstein shows how the concept of bodily fragmentation has been in circulation since the 16th century’s investigation of anatomy. The history of the body-in-pieces, she argues, is a history of a struggling relationship between two concepts of the body—as fragmented and as holistic. Wegenstein shows that by the 20th century these two apparently contradictory movements were integrated; both fragmentation and holism, she argues, are indispensable modes of imagining and configuring the body. The history of the body, therefore, is a history of mediation; but it was not until the turn of the 21st century and the digital revolution that the body was best able to show its mediality.

After examining key concepts in body criticism, Wegenstein looks at the body as “raw material” in 20th-century performance art, medical techniques for visualizing the human body, and strategies in popular culture for “getting under the skin” with images of freely floating body parts. Her analysis of current trends in architecture and new media art demonstrates the deep connection of body criticism to media criticism. In this approach to body criticism, the body no longer stands in for something else—the medium has become the body.

As Walter Stephens demonstrates in Demon Lovers, it was not Hausmännin or other so-called witches who were obsessive about sex with demons—instead, a number of devout Christians, including trained theologians, displayed an uncanny preoccupation with the topic during the centuries of the “witch craze.” Why? To find out, Stephens conducts a detailed investigation of the first and most influential treatises on witchcraft (written between 1430 and 1530), including the infamous Malleus Maleficarum (Hammer of Witches).

Far from being credulous fools or mindless misogynists, early writers on witchcraft emerge in Stephens’s account as rational but reluctant skeptics, trying desperately to resolve contradictions in Christian thought on God, spirits, and sacraments that had bedeviled theologians for centuries. Proof of the physical existence of demons—for instance, through evidence of their intercourse with mortal witches—would provide strong evidence for the reality of the supernatural, the truth of the Bible, and the existence of God. Early modern witchcraft theory reflected a crisis of belief—a crisis that continues to be expressed today in popular debates over angels, Satanic ritual child abuse, and alien abduction.