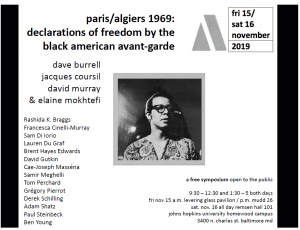 At the close of the 1960s leading black American musicians associated with the “free jazz” scenes of New York and Chicago left for Paris. Weary of a poisoned U.S. political climate and eager to work, they would spend months or even years in the French capital seeking new opportunities to perform and record, often alongside […]

Documentary filmmakers have long endeavored to make visible and to give voice to the aspirations and struggles of workers and working communities. Featuring the work of prominent filmmaker/journalist Marcel Trillat, this symposium highlights the ways in which French documentary films takes stock of changes in the workplace from the factory to the school classroom, to […]

From Feb. 26 to March 7, the 2019 Tournées Film Festival at JHU will bring six contemporary and classic French-language films to Hopkins’ Homewood Campus. This year’s screenings–all free and open to the public–include a rousing drama about political activism, a groundbreaking work of ethno-fiction, and important documentaries from masters of the form. The festival […]

Decades before the emergence of a French self-styled ‘hood’ film around 1995, French filmmakers looked beyond the gates of the capital for inspiration and content. In the Paris suburbs they found an inexhaustible reservoir of forms, landscapes and social types in which to anchor their fictions, from bourgeois villas and bucolic riverside cafés to post-war […]

On March 9 and March 10, 2017, the Centre pluridisciplinaire Louis Marin at JHU is pleased to celebrate its 25th anniversary by honoring its namesake, the French semiotician, literary critic, and historian of ideas Louis Marin (1931-1992). The international colloquium “Power and Representation/Pouvoir et représentation” brings together a dozen scholars from France, Italy, Germany, and […]

Friday, April 8: To mark the 100th anniversary of the birth of essayist, critic, and writer Roland Barthes, who attended the interdisciplinary 1966 conference held at Johns Hopkins on “The Languages of Criticism and the Science of Man,” the Centre Louis Marin and the French section of the Department of German and Romance Languages and Literatures are […] 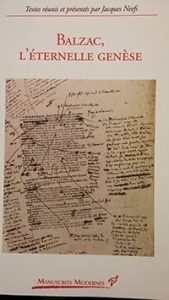