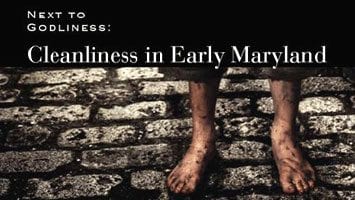 The adage “Cleanliness is next to godliness” was certainly familiar to Homewood’s residents, the Carrolls, and their contemporaries. Even without the religious context, they understood that cleanliness promoted health and that filth promoted disease. In fact, the very reason for building Homewood House was, in large part, to promote clean and healthful country living.

This focus show explored aspects of clean and dirty in the early 19th century including garbage, laundry, housekeeping, bathing, the issue of stink, shaving, tooth care, hair care, cosmetics, elimination, and even feminine hygiene. It was the result of research conducted by students as part of the annual Curating Homewood course.

The course and the focus show were made possible by the late Anne Merrick Pinkard. Serious but with a good dose of humor, the show received strong attention in local blogs and papers.