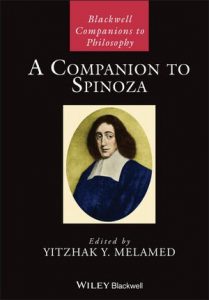 A Companion to Spinoza presents a panoramic view of contemporary Spinoza studies in Europe and across the Anglo-American world. Designed to stimulate fresh dialogue between the analytic and continental traditions in philosophy, this extraordinary volume brings together 53 original essays that explore Spinoza’s contributions to Western philosophy and intellectual history. A diverse team of established and emerging international scholars discuss new themes and classic topics to provide a uniquely comprehensive picture of one of the most influential metaphysicians of all time. Rather than simply summarizing the body of existing scholarship, the Companion develops new ideas, examines cutting-edge scholarship, and suggests directions for future research. The text is structured around six thematically-organized sections, exploring Spinoza’s life and background, his contributions to metaphysics and natural philosophy, his epistemology, politics, ethics, and aesthetics, the reception of Spinoza in the work of philosophers such as Kant, Schelling, Schopenhauer, and Hegel, and more. This unparalleled research collection combines a timely overview of the current state of research with deep coverage of Spinoza’s philosophy, legacy, and influence. Part of the celebrated Blackwell Companions to Philosophy series, A Companion to Spinoza is an ideal text for advanced courses in modern philosophy, intellectual history, and the history of metaphysics, and an indispensable reference for researchers and scholars in Spinoza studies. 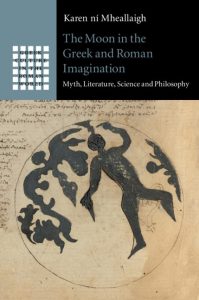 The Moon exerted a powerful influence on ancient intellectual history, as a playground for the scientific imagination. This book explores the history of the Moon in the Greco-Roman imaginary from Homer to Lucian, with special focus on those accounts of the Moon, its attributes, and its ‘inhabitants’ given by ancient philosophers, natural scientists and imaginative writers including Pythagoreans, Plato and the Old Academy, Varro, Plutarch and Lucian. Ní Mheallaigh shows how the Moon’s enigmatic presence made it a key site for thinking about the gaze (erotic, philosophical and scientific) and the relation between appearance and reality. It was also a site for hoax in antiquity as well as today. Central issues explored include the view from elsewhere (selēnoskopia), the relation of science and fiction, the interaction between the beginnings of science in the classical polis and the imperial period, and the limits of knowledge itself.

Shortlisted for the Runciman Prize, 2021. 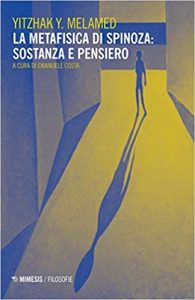 A new Italian translation of Spinoza’s Metaphysics: Substance and Thought. Yitzhak Y. Melamed comes to theorize the ability of thought to embrace the entirety of the divine extension, without encroaching on the idealism of the work. The dualism that holds thought and existence together – one of the keys to understanding Spinoza’s thought – is safeguarded with an impressive methodological care. 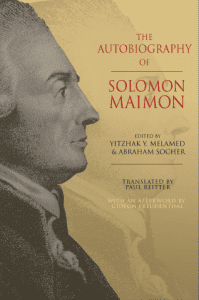 The first complete and annotated English translation of Maimon’s influential and delightfully entertaining memoir. Solomon Maimon’s autobiography has delighted readers for more than two hundred years, from Goethe, Schiller, and George Eliot to Walter Benjamin and Hannah Arendt. The American poet and critic Adam Kirsch has named it one of the most crucial Jewish books of modern times. Here is the first complete and annotated English edition of this enduring and lively work. Born into a down-on-its-luck provincial Jewish family in 1753, Maimon quickly distinguished himself as a prodigy in learning. Even as a young child, he chafed at the constraints of his Talmudic education and rabbinical training. He recounts how he sought stimulation in the Hasidic community and among students of the Kabbalah–and offers rare and often wickedly funny accounts of both. After a series of picaresque misadventures, Maimon reached Berlin, where he became part of the city’s famed Jewish Enlightenment and achieved the philosophical education he so desperately wanted, winning acclaim for being the “sharpest” of Kant’s critics, as Kant himself described him. This new edition restores text cut from the abridged 1888 translation by J. Clark Murray, which has long been the only available English edition. Paul Reitter’s translation is brilliantly sensitive to the subtleties of Maimon’s prose while providing a fluid rendering that contemporary readers will enjoy, and is accompanied by an introduction and notes by Yitzhak Melamed and Abraham Socher that give invaluable insights into Maimon and his extraordinary life. The book also features an afterword by Gideon Freudenthal that provides an authoritative overview of Maimon’s contribution to modern philosophy. 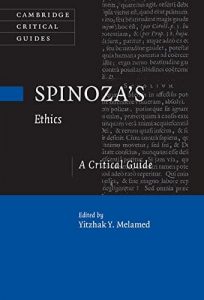 Spinoza’s Ethics, published in 1677, is considered his greatest work and one of history’s most influential philosophical treatises. This volume brings established scholars together with new voices to engage with the complex system of philosophy proposed by Spinoza in his masterpiece. Topics including identity, thought, free will, metaphysics, and reason are all addressed, as individual chapters investigate the key themes of the Ethics and combine to offer readers a fresh and thought-provoking view of the work as a whole. Written in a clear and accessible style, the volume sets out cutting-edge research that reflects, challenges, and promotes the most recent scholarly advances in the field of Spinoza studies, tackling old issues and bringing to light new subjects for debate. 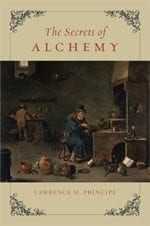 The Secrets of Alchemy brings alchemy out of the shadows and restores it to its important place in human history and culture. By surveying what alchemy was and how it began, developed, and overlapped with a range of ideas and pursuits, this book illuminates the actual ideas and practices of generations of alchemists. The author vividly depicts the place of alchemy during its heyday in early modern Europe, and then explores how alchemy has fit into wider views of the cosmos and of humanity, touching on its enduring place in literature, fine art, theater, and religion as well as its recent acceptance as a serious subject of study for historians of science. In addition, the book introduces the reader to some of the most fascinating alchemists, such as Zosimos and Basil Valentine, whose lives dot alchemy’s long reign from the second century AD to the present day. Through his exploration of alchemists and their times, Principe pieces together closely guarded clues from obscure and fragmented texts to reveal alchemy’s secrets, and—most exciting for budding alchemists—uses them to recreate many of the most famous recipes in his laboratory at Johns Hopkins, including those for the “glass of antimony” and “philosophers’ tree.” This unique approach brings the reader closer to the actual practice of alchemy than any other book. 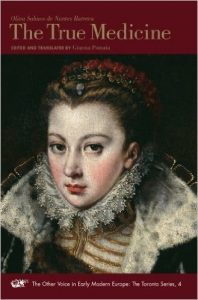 One of the first printed medical texts to be attributed to a female author, “The True Medicine” (1587) is radically innovative in its rejection of contemporary medical theory for a more pro-feminist physiology and cosmology. With unprecedented clarity and care, Gianna Pomata brings an important text in the history of scientific authorship to the attention of modern-day readers. 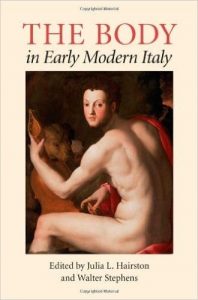 Human bodies have been represented and defined in various ways across different cultures and historical periods. As an object of interpretation and site of social interaction, the body has throughout history attracted more attention than perhaps any other element of human experience. The essays in this volume explore the manifestations of the body in Italian society from the fourteenth through the seventeenth centuries.

Adopting a variety of interdisciplinary approaches, these fresh and thought-provoking essays offer original perspectives on corporeality as understood in the early modern literature, art, architecture, science, and politics of Italy. An impressively diverse group of contributors comment on a broad range and variety of conceptualizations of the body, creating a rich dialogue among scholars of early modern Italy. 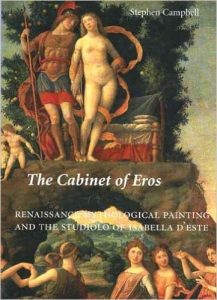 The Renaissance studiolo was a space devoted in theory to private reading and contemplation, but at the Italian courts of the fifteenth century, it had become a space of luxury, as much devoted to displaying the taste and culture of its occupant as to studious withdrawal. The most famous studiolo of all was that of Isabella d’Este, marchioness of Mantua (1474–1539). A chief component of its decoration was a series of seven paintings by some of the most noteworthy artists of the time, including Andrea Mantegna, Pietro Perugino, Lorenzo Costa, and Correggio.

These paintings encapsulated the principles of an emerging Renaissance artistic genre—the mythological image. Using these paintings as an exemplary case, and drawing on other important examples made by Giorgione in Venice and by Titian and Michelangelo for the Duke of Ferrara, Stephen Campbell explores the function of the mythological image within a Renaissance culture of readers and collectors. 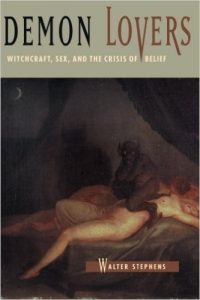 As Walter Stephens demonstrates in Demon Lovers, it was not Hausmännin or other so-called witches who were obsessive about sex with demons—instead, a number of devout Christians, including trained theologians, displayed an uncanny preoccupation with the topic during the centuries of the “witch craze.” Why? To find out, Stephens conducts a detailed investigation of the first and most influential treatises on witchcraft (written between 1430 and 1530), including the infamous Malleus Maleficarum (Hammer of Witches).

Far from being credulous fools or mindless misogynists, early writers on witchcraft emerge in Stephens’s account as rational but reluctant skeptics, trying desperately to resolve contradictions in Christian thought on God, spirits, and sacraments that had bedeviled theologians for centuries. Proof of the physical existence of demons—for instance, through evidence of their intercourse with mortal witches—would provide strong evidence for the reality of the supernatural, the truth of the Bible, and the existence of God. Early modern witchcraft theory reflected a crisis of belief—a crisis that continues to be expressed today in popular debates over angels, Satanic ritual child abuse, and alien abduction. 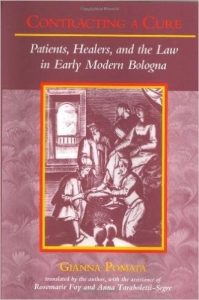 In Contracting a Cure, Gianna Pomata tells the hitherto unknown story of a fundamental shift in the relationship between healers and patients in the early modern Europe. Using a wide array of sources — including the rich archives of Bologna’s College of Medicine and legal records from several European countries — Pomata explores the tradition of the “agreement for a cure” whereby the practitioner was contractually bound to heal the sick person within a specified period and for a stipulated sum. If the patient was not cured, he or she had a legal right to reclaim from the practitioner any money advanced for the cure. The author argues that such contracts implied a “horizontal model” of healing that gave considerable power to patients and that, in consequence, was a serious hindrance to the growing power of the medical profession. The book shows how the “agreement for a cure” disappeared by the end of the early modern period precisely because of the determined opposition of physicians and jurists, who realized that payment by results was incompatible with the professionalization of medicine.

More than a simple history of professionalization, however, Contracting a Cure recreates the vanished world of meanings that patients and healers gave to their encounters in the past and recaptures the usually neglected voices of ordinary patients. With Contracting a Cure, Gianna Pomata brings us a compelling account of the erosion of patients’ rights that was a basic precondition for the dominance of doctors that characterizes present-day medicine. In recountingthe history of the “agreement for a cure” she reveals a notion of justice profoundly different from the one that regulates medical practice today. The history of the cure agreement, she concludes, is but a fragment in a wider history of the notions of justice we have lost.

Faculty, students, and alumni, send us your news items.

Sign up here for a weekly list of events relating to the study of pre-modern Europe and the Singleton Center.