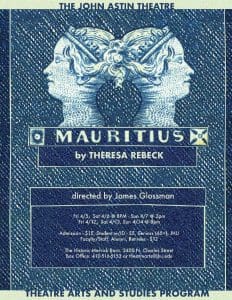 In the John Astin Theatre at The Historic Merrick Barn, 3400 N. Charles Street.

A rare and precious thing is trust. Rarer still, the truth. Two sisters find themselves with an inheritance potentially worth millions… or is it? Their late grandfather’s stamp collection vaults them into a shady underworld, where value is perception, uncertainty is currency, and everyone is forced to fight for what they believe…

The John Astin Theatre and Theatre Arts & Studies present Theresa Rebeck’s hit Broadway comedy-drama Mauritius, directed by James Glossman. The play runs April 5-7 and April 12-14 at The John Astin Theatre in the historic Merrick Barn on the Johns Hopkins Homewood Campus. Show times are at 8pm on April 5-6 & 12-14, and 2pm on Sunday, April 7.

Ticket prices are $5 for students with ID; $12 for seniors 65+ and Johns Hopkins alumni, faculty, staff, and retirees; and $15 for general admission.  Contact the box office at 410-516-5153 or theatrearts@jhu.edu.  Reservations are encouraged, but walk-up ticket purchases accepted. (Cash or check only.) Lobby doors open one hour before performances. Be advised that occasional coarse language appears throughout.