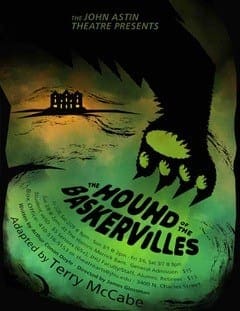 The John Astin Theatre presents The Hound of the Baskervilles, a production of the Theatre Arts Program directed by James Glossman.
Showtimes
8 p.m., Friday, February 28
8 p.m., Saturday, February 29
2 p.m., Sunday, March 1
8 p.m., Friday, March 6
8 p.m., Saturday, March 7
2 p.m., Sunday, March 8
In the John Astin Theatre at The Historic Merrick Barn, 3400 N. Charles Street.
Admission
General Admission – $15
Student with ID – $5
Seniors (65+) and JHU Faculty, Staff, Alumni, Retirees – $12
Sir Charles Baskerville has been found dead on the desolate moor beside his magnificent Devonshire estate. There are no marks of death, but only, beside the body, the footprints of a gigantic hound. Could it be the legendary monster said to haunt the moors for centuries, bringing doom to generations of the Baskerville family? Or is something more modern, cold-blooded, and human stalking the estate? Join Sherlock Holmes and his intrepid companion Dr Watson as they fight to save the American heir to the Baskerville Fortune, before the spectral Hound can claim its latest victim!
The John Astin Theatre and Theatre Arts & Studies present The Hound of The Baskervilles, adapted by Terry McCabe, and directed by James Glossman. The play runs February 28-March 1 and March 6-8 at The John Astin Theatre in the historic Merrick Barn on the Johns Hopkins Homewood Campus. Show times are at 8pm on February 28, 29, and March 6, 7, and 2pm on Sunday, March 1 and 8.
Ticket prices are $5 for students with ID; $12 for seniors 65+ and Johns Hopkins alumni, faculty, staff, and retirees; and $15 for general admission. Contact the box office at 410-516-5153 or theatrearts@jhu.edu. Reservations are encouraged, but walk-up ticket purchases accepted. (Cash or check only.) Lobby doors open one hour before performances.