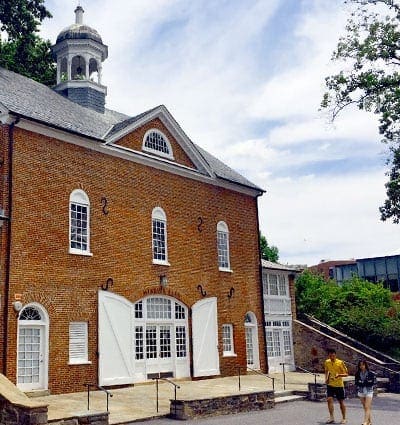 The John Astin Theatre is located in the historic Merrick Barn, which is also home to the Undergraduate Program in Theatre Arts & Studies.

Visitors should park in the South Garage, located under the Decker Quadrangle on Wyman Park Drive. The garage is fully automated and open 24 hours. The pay station is in the vestibule next to the Parking Office. The weekend flat rate is $8.

The theatre was named for John Astin, A&S ’52, a longtime character actor and the star of TV’s The Addams Family, during a ceremony celebrating the Merrick Barn’s most recent renovations. In 2001, Astin returned to Johns Hopkins to serve as a visiting professor in the Writing Seminars and teach acting and directing to undergraduates. He was recently named a Homewood Professor of the Arts.