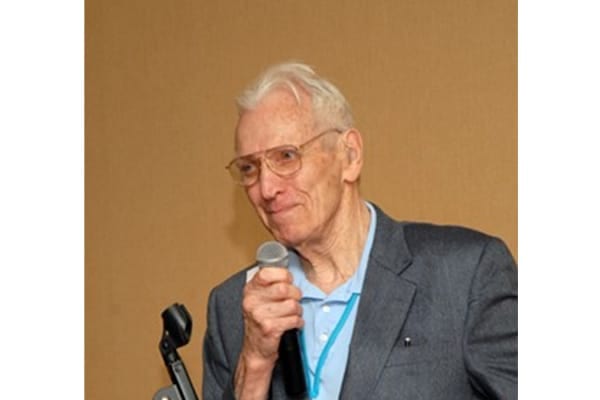 Carl Christ, a leading light in the economics profession and a beloved member of the Johns Hopkins Economics department, died Friday April 21. Carl, 93, was one of the most influential economists of his generation working on econometrics, macroeconomic modelling, and monetary and fiscal policy.

There is a lovely article about Carl’s life and what he meant to Hopkins at the JHU Hub, but we want to add a few thoughts, for the CFE almost certainly would not exist were it not for Carl and his colleague Lou Maccini.

Carl and Lou deeply touched generations of JHU economics students and those students contributed the funds that established the Carl Christ and the Lou Maccini Professorships, which form the core of the CFE.

Everyone around here has fond stories of Carl, but CFE co-director Bob Barbera has more stories than most, having been taught by Carl as an undergraduate and PhD student and then, after a long career, having joined Carl as a colleague. Like many of Carl’s students over the years, Bob recalls an interaction that was pivotal in his life:

I was taking Carl’s Macroeconomic Principles class in the fall of 1972. My heart, however, was consumed by environmental issues. I had just read The Limits to Growth, a Malthusian tract that projected a desperate world in the 1990s stripped of supplies of oil, copper and other natural resources. In the shower at the gym I saw Carl and explained my fears flowing from this book. He smiled his warm smile, looked up for a long pause, and said, “Interesting…You might also want to read Scarcity and Growth. I quickly did so and had my Aha moment: price signals and their effects on technology could radically alter environmental outcomes, making the future a bit less scary. More fundamentally for me, I suddenly saw that economic analysis could provide priceless insights about environmental challenges, and a host of other issues. And I never looked back.

Carl had long been retired by the time I joined the Hopkins Economics Dept., but he, nonetheless, remained active, attending seminars and even serving on Department Committees. Carl quickly struck up a discussion with me on the conduct of monetary policy, and when the financial crisis exploded on the world stage shortly thereafter, our discussions grew much deeper. I benefitted greatly from those conversations, which continued until very recently. Along with his intellectual insights, I’ll cherish Carl’s generosity in sharing his warmth, wit, and burning curiosity.

Carl was a magnificent colleague, and we’ll miss him greatly.