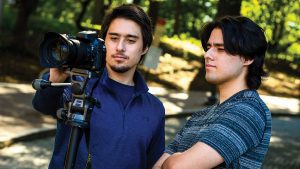 Curtis and Thomas Nishimoto were featured in the fall 2020 Arts & Sciences Magazine for their film Nurikabe, which Thomas wrote and Curtis will direct. The 12-minute movie, to be shot next summer, is described as a dark fantasy in the vein of 2006’s Pan’s Labyrinth and incorporates elements of Japanese folklore. The brothers discuss what drew them to Film and Media Studies, and their plans for the short film.