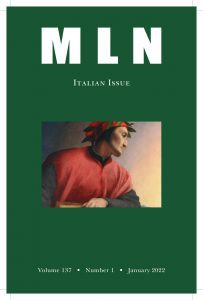 In 1986, Giuseppe Mazzotta, addressing the legacy of the great Dante scholar Charles Southward Singleton, argued that the fairest way to confront the power of Singleton’s work was to avoid the veneration of the master by his disciples and let oneself be guided by a different, more vital principle: perplexity. Veneration, Mazzotta argued, is violent, for “it freezes the thinking of both the scholar and his epigones, it rigidifies it in fixed formulae and, in effect, destroys it.” But “perplexity,” etymologically, involves “interlacing,” “mixing together.”

In this sense, perplexity is the best way to approach the production of a scholar like Singleton, as it forces us to actively face our debt to—and distance from—his work, all while intertwining our perspectives with his. For the seven-hundredth centenary of Dante’s death, this special issue of MLN revives this exercise in perplexity, celebrating the vitality of Singleton’s teachings in contemporary Dante studies. Francesco Brenna and Alberto Zuliani asked both emergent and affirmed scholars to reflect upon this matter by asking how Singleton’s intellectual legacy still affects their work and have collected the results here as an homage to the ability of Singleton’s teachings to still function as a trigger or reagent for new ideas and for the advancement of our understanding of Dante’s work. A perplexed homage, indeed, where worship finds no quarter and where Singleton and even Dante can be read anew.