Eduardo González is Professor of Spanish, Director of the Spanish and Latin American Subdivision, and Director of Undergraduate Studies. He is an affiliated faculty member of the Center for Advanced Media Studies and the Program in Latin American Studies. He specializes in the literature, cinema, and interconnected history of Hispanic America, Spain, and the United States. A leading scholar of Caribbean literature and culture, his scholarship is characterized by a persistent engagement with questions of national, cultural, and sexual identity.

He received his Ph.D. from Indiana University, Bloomington in 1975 and joined the faculty at Johns Hopkins in 1981 after holding positions at Williams College,Bennington College, and the University of North Carolina, Chapel Hill. In 1997, he founded and led the Johns Hopkins University-Fernando Ortiz Foundation Seminars, held annually in Cuba until 2004 and, again, in 2012 and 2013, with the participation of a diverse group of Hopkins students and Cuban scholars and artists.

He has published widely on Latin American literature and culture, including studies of, among others, Juan José Saer, Jorge Luis Borges, Severo Sarduy, José Lezama Lima, Reinaldo Arenas, and Virgilio Piñera. He is the author of Carpentier, el tiempo del hombre (Caracas), La persona y el relato (Madrid), The Monstered Self (Duke), Cuba and the Tempest (UNC), and Cuba and the Fall (Virginia).

My extended work has involved the literatures of the American South, Spain, and the Caribbean. Main areas of research concern political and moral philosophy in the honor-coded dialectics between abnegation, egoism, and revenge in the statecraft dramas of Pedro Calderón de la Barca, Shakespeare, and the English revenge plays (The Spanish Tragedy in particular). I confront these plays as a mirror to reflect on the multiple current crises in US political culture, especially on the lost sense of legitimacy and tragic swerve of American democratic politics into dangerous fantasies of global might. My novelist of choice at this moment is Juan Gabriel Vásquez, his entire corpus of fictions about Colombia's disasters and hopes. I am working on a short book on the comedies of Machiavelli, Ben Jonson's Volpone, and Jacques Derrida's portraits and images of photoshop Socrates.

Professor González teaches courses on a wide-range of topics in Latin American, Spanish, and comparative literature and culture. He has supervised more than twenty doctoral dissertations in those fields, including several on American literature. In addition to the Johns Hopkins University-Fernando Ortiz Foundation Seminars, he has also directed the university’s exchange program with the Fernando Ortiz Foundation and has served on numerous advisory boards in honors programs and other undergraduate initiatives across the university. Below is a partial list of recent graduate and undergraduate courses he has taught:

Professor González’s research and publications range across twentieth-century Latin American literature and cinema. As a comparativist, his work often reads Borges, Cortázar, Vargas Llosa, and other Latin American writers in conversation with such writers as Chaucer, Joyce, and Poe. His books have focused on Cuban culture, especially literature’s relationship to queer identity (Cuba and the Fall) and cinema (Cuba and the Tempest), and is  theoretically informed, frequently weaving psychoanalysis and political philosophy into studies of Latin American and world literature (The Monstered Self). His scholarly articles, reviews, and essays have appeared in such journals as MLN, Dispositio/n, diacritics, Cuban Studies, Catauro, and Crítica Hispánica, as well as in numerous edited volumes.

Cuba and the Fall 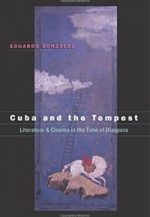 Cuba and the Tempest: Literature and Cinema in the Time of Diaspora