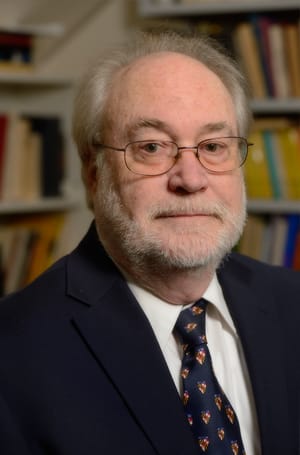 Harry Sieber is Professor of Spanish and Director of Graduate Studies for Spanish. His scholarly expertise reaches back to the late Middle Ages and forward to Renaissance and Baroque Spanish literature and culture. One of the most renowned Cervantes scholars in the world, Professor Sieber’s scholarly edition of Cervantes’ Novelas Ejemplares, published by Cátedra, is now in its 26th edition.

He began teaching at Johns Hopkins in 1967, after received his Ph.D. in Romance Languages from Duke University. Since then, he has served as an Editor of MLN, including stints as the General Editor and, most recently, as the Chief Editor of the journal’s Hispanic Issue. He has received numerous awards and fellowships, including Guggenheim, NEH, ACLS, Woodrow Wilson, and U.S.-Spain Joint Committee Research fellowships.

Professor Sieber has published numerous studies on the Spanish comedia, the works of the late medieval poet, Gómez Manrique, the satire of Francisco de Quevedo and the fiction of Miguel de Cervantes. He is the author of The Picaresque (Methuen) and Language and Society in the ‘Lazarillo de Tormes’ (JHU Press), the editor of numerous scholarly volumes, and the translator, with Charles Davis, of Francisco Rico’s The Picaresque Novel and the Point of View (Cambridge).

Hi is also preparing two further projects. The first, Literary Patronage in the Court of Philip III (1598-1621), is an interdisciplinary study of court literature; the interrelationships between history, art history, theater, prose and lyric poetry written and/or performed during the early years of the seventeenth century in Spain. The second, Madrid and the Spanish Golden Age, is a project based on documents housed in the Archivo de La Villa de Madrid (Town Council Archive) about urban life in the Court from 1590-1621.

His books have focused on authors such as Cervantes (Wit and Wisdom of Don Quixote and his Novelas ejemplares), and the picaresque novel (The Picaresque and Language and Society in the ‘Lazarillo de Tormes’). His book, The Wit and Wisdom of Don Quixote de la Mancha, is a compilation of proverbs and witty sayings found in Cervantes’ masterpiece, based on Tobias Smollett’s classic translation. His scholarly articles have appeared in Hispanic Review, Revista Hispánica Moderna, Bulletin of the Comediantes, and MLN, among other journals.

His current research focuses on the social, historical and political contexts of Golden Age Spanish literature, with particular emphasis on patron/client relationships, the Spanish aristocracy, print culture, and historiography.

The Wit and Wisdom of Don Quixote de la Mancha