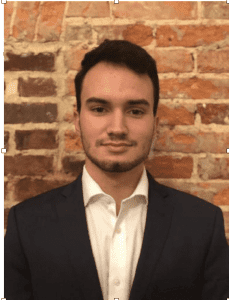 Eduardo da Costa, a senior in the Portuguese program at Hopkins, received the Boren Scholarship award to study Portuguese in Mozambique. The Boren is an opportunity for students to study foreign language abroad, and Eduardo was one of the 217 awardees, including 8 other awardees from Johns Hopkins. Studying abroad was always a big goal for Eduardo, and the Boren program will provide an immersive and complete experience. The Boren entails intensive written and spoken Portuguese instruction as well as additional extracurricular activities, but thanks to the JHU Portuguese Program he feels that he has been well prepared for the work and experience ahead.

Studying Portuguese has been one of the highlights of Eduardo’s career at Hopkins. “The classes are fun and dynamic, Dr. Flavia Azeredo is amazing and the entire department feels just like one big family united in their interest in the Portuguese/Brazilian language and culture. Throughout my time taking Portuguese with Dr. Azeredo at JHU, I developed useful language skills, cultural knowledge, and the intense differences between the US and Brazilian healthcare system. I think that is where I was inspired to go after that specific field in medicine, and it was through the Portuguese program and classes that I had the opportunity to unite my two interests into one.”

After the Boren program, Eduardo plans on going to the medical school where he will continue his studies on different national healthcare systems and attempting to unite medicine on a global scale.

National Security Education Program (NSEP) David L. Boren Undergraduate Scholarships are designed to provide students with the resources and encouragement they need to acquire skills and experience in countries and areas of the world critical to the future security of our nation. They focus on geographic areas, languages, and fields of study that are critical to U.S. national security, broadly defined, and underrepresented in study abroad. In exchange for Boren Award funding, students commit to seek work in the federal government for a specified period of time.