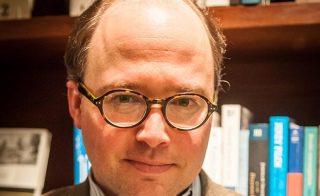 Adjunct Professor, Modern Languages and Literatures
Director, The Virginia Fox Stern Center for the History of the Book in the Renaissance
Nancy H. Hall Curator of Rare Books and Manuscripts, Sheridan Libraries

Dr. Havens earned an interdisciplinary joint-PhD in Renaissance Studies and History from Yale University with a dissertation exploring the underground print culture of the Counter-Reformation during the second half of the sixteenth century, in England and on the European continent. His academic teaching and published scholarship focus on the history of the book and material texts in early modern Europe, ca. 1400-1750.

He has authored, co-authored, and edited twelve scholarly books and exhibition catalogues, and several dozen articles and book chapters, most recently on the marginalia of the Renaissance humanist Gabriel Harvey, the early history of the Leiden University Library, the Platin-Moretus press, and a series of new entries for the Oxford Dictionary of National Biography on female Catholic book smugglers and conspirators of the late 16th-century. His most recent books are, with Walter Stephens, Literary Forgery in Early Modern Europe, 1450-1800 (John Hopkins Press, 2018) and, with Susannah Monta and Elizabeth Patton, a large-scale study of the lives of the Elizabethan Catholic earl and countess of Arundel, Philip and Anne Howard, to be published in the University of Toronto’s PIMS series, Catholic and Recusant Texts in 2023. Dr. Havens is currently co-editing two other books: (1) one with Mark Rankin entitled The Elizabethan Catholic Underground: Clandestine Printing and Scribal Subversion in the English Counter-Reformation (Brill, 2023); and (2) with Erin Rowe, Women of the Book: The Spiritual Lives of Early Modern Women, 1450-1800 (Pennsylvania State University Press, 2024).

Since 2017, Earle Havens has served as a founding co-editor, with Anthony Grafton and Ann Blair, of the “Information Cultures” monographic series of the Johns Hopkins University Press, and has served as a reviewer and contributor to numerous juried scholarly journals—Renaissance Quarterly, Journal of the History of Ideas, Modern Language Notes, Reformation, The Library, The Papers of the Bibliographical Society of America, and De Gulden Passer—and for a range of academic presses, including Brepols, Brill, the Johns Hopkins University Press, the Pennsylvania State University Press, the University of Illinois Press, and the University of Manchester Press. He serves on several editorial and advisory boards, as well, most recently for the Library of the Written Word: The Handpress World book series edited by Andrew Pettegree (Brill); the Warwick Studies in Renaissance Thought & Culture (Brepols); Early Modern Women Writers in Europe: Texts, Debates, and Genealogies of Knowledge (Brepols); the Oxford Edition of the Works of Robert Southwell (Oxford University Press); and the advisory board the Universal Short Title Catalogue.

Earle Havens served for five years as the Principal Investigator of the digital humanities project The Archaeology of Reading in Early Modern Europe (2013-18), with Anthony Grafton, Lisa Jardine, and Matthew Symonds; funded by the Andrew W. Mellon Foundation, this project unlocks and makes searchable the marginalia across dozens of books owned and annotated by the 16th-century scholars Gabriel Harvey and John Dee. The Archaeology of Reading project led directly to the creation of the Virginia Fox Stern Center for the History of the Book in the Renaissance at JHU of which Dr. Havens serves as inaugural Director—a permanently endowed academic research Center within the Sheridan Libraries founded in honor of Dr. Stern, the Renaissance marginalia scholar. Since 2022, the Stern Center has been based in a suite of newly renovated and dedicated rooms at Hopkins’ Evergreen Museum & Library (4545 North Charles Street). Dedicated to the study of the early book and manuscript collections of the Sheridan Libraries, the Stern Center sponsors an annual lecture series; an annual Stern Center Symposium; and Visiting Research Fellowships for scholars to conduct research on JHU’s collections, sponsored through the Renaissance Society of America and the American Trust of the British Library. The Stern Center also hosts object- and skills-based Master Classes for faculty and graduate students in the humanities on a wide range of topics relating to premodern and early modern book history, and serves as the home of a cohort of four year-long Stern Center Graduate Curatorial Fellows, who are selected annually from among advanced-stage doctoral candidates across the humanities departments at Johns Hopkins.

Earle Havens has served as Curator and co-Curator of a dozen major rare book exhibitions in the US and Europe, and has lectured widely on the history of the book, most recently at the Herzog August Library, Wolfenbüttel, Durham University, the University of Trento, the Autonomous University of Barcelona, and the University of Gothenburg. His scholarly research has been supported most recently by rare book research fellowships from the Houghton, Huntington, and Clark Libraries. In 2019, he was a Member of the School of Historical Studies at the Institute for Advanced Study in Princeton, and in 2021 was a Visiting Fellow at All Souls College, Oxford.

Literature and Truth: The History of Literary Forgery

Halls of Wonder: The Origins of Museums and Libraries from Antiquity to the Enlightenment