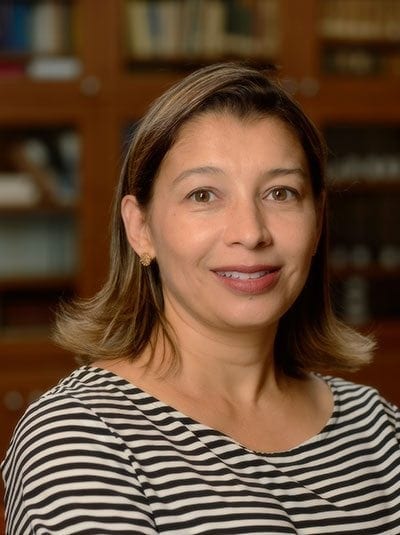 Flavia De Azeredo-Cerqueira is the director of the Portuguese Language Program and teaches Portuguese Elements, Intermediate, Advanced, and Brazilian Culture and Civilization courses.

Dr.  Azeredo-Cerqueira received her PhD in Applied Linguistics from the Federal University of Minas Gerais (Brazil). Her thesis investigates implicit corrective feedback and the role of working memory capacity. She also received an MA degree in Linguistics and Second Language Acquisition focusing on Phonetics and Phonology from the same university. She has a BA in English and Portuguese Languages from the same institution.

Dr. Azeredo-Cerqueira taught Portuguese language as well as courses in Brazilian cinema and culture for five years in four different institutions: at the Morgan State University in Baltimore, at the University of Maryland at College Park, at the American University in Washington, D.C., and at Johns Hopkins University in the spring of 2010.

For several years she worked at the Brazilian-American Cultural Institute (BACI, a former branch of the Cultural Department of the Brazilian Embassy), Washington, D.C. There she taught Portuguese as a foreign language and also served as a course coordinator and material developer.

From August 2012 to August 2013, Dr. Azeredo-Cerqueira worked as a visiting professor at Federal University of Minas Gerais teaching and researching aspects related to second language acquisition.

AZEREDO-CERQUEIRA, F.; BADGER, S. (in press). Dynamics of Language Motivation and Attitudes: a Study with English for Academic Purposes Learners.

AZEREDO, F. (2005). Phonetics and phonology applied to foreign language teaching: the case of the high front vowels and the glide /j/ in English and in Brazilian Portuguese. Phonetics Teaching and Learning Conference (PTLC), University College of London: London, UK.

Dr. Azeredo-Cerqueira created the Annual Symposium on Brazil at Morgan State University (Baltimore, MD). Each year the event presented a different focus (see below), getting larger along its sequence. It included the participation of dignitaries from the Brazilian Embassy such as the Cultural and Educational Attachés, distinguished scholars, World Bank researchers, and speakers from other international organizations. The symposia contained hands-on workshops, film exhibitions, students’ presentations, and diverse cultural activities related to Brazil.

III Symposium on Brazil, November 8-9, 2010: BRAZIL IN FOCUS: A Discussion on Afro-Brazilian Society