Jacques Neefs was named professor emeritus on July 1, 2018 in the Department of German and Romance Languages and Literatures at Johns Hopkins University. From 1998 to 2006, he was the Louis Marin Distinguished Visiting Professor. He has been associate professor (1980–1990) and professor (1990–2006) at the University Paris 8 and director of the research program in the new field of textual genetics at the CNRS since 1990. He has initiated several programs of teaching and research with foreign universities in Europe, the United States, Canada, Japan, China, and Russia.

Jacques Neefs’s main research interests are the links between literature and history, literature and sciences, literature and knowledge in 19th- and 20th-century French literature, theory of modernity, and genetic criticism. His current research project is about “Prose as a Modern Art, from Flaubert to Proust.” He is currently editing La Tentation de saint Antoine and Bouvard et Pécuchet, for a new edition of Flaubert’s Œuvres complètes, Gallimard, Bibliothèque de la Pléiade, and editing a collection of articles on genetic criticism. 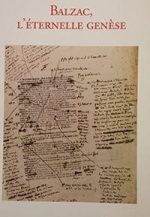