Jennifer Gosetti-Ferencei is Professor and Kurrelmeyer Chair in German and Professor in Philosophy at Johns Hopkins University. Her research interests include Continental philosophy, particularly phenomenology and existentialism, aesthetics and the philosophy of literature, cognitive literary theory, poetics, philosophy of imagination, modernism, especially modern German literature, and literary ecology. She has previously taught in modern languages departments in the UK (Oxford and Birmingham, at the latter of which she was Chair and Professor of German and Comparative Literature) and was Professor of Philosophy at Fordham University. She received a DPhil in German and MSt in European Literature from Oxford; MA and PhD in Philosophy from Villanova; and an MFA in Poetry from Columbia University. For 2023, she has been appointed Visiting Fellow at All Souls College, Oxford.

Gosetti-Ferencei’s research has included books on existentialism, on the philosophy of imagination, on the construction of the exotic in German modernism, on the relationship between the quotidian or everyday experience and ecstatic reflection in phenomenology, modern art and literature, and a critical reading of poetics in Heidegger and Hölderlin. Her work explores the boundaries between philosophy and literature, poetic experience and cognition, and in addition to Hölderlin her work has engaged the writings of Rainer Maria Rilke, Wallace Stevens, Marcel Proust, Franz Kafka, Thomas Mann, and many other modernist writers. Her work in aesthetics has engaged the visual art of Paul Cézanne, Cy Twombly, Giorgio Morandi, Alfred Kubin, Georg Baselitz and Anselm Kiefer. Her book of poetry, After the Palace Burns, won The Paris Review Prize.

In On Being and Becoming: An Existentialist Approach to Life (Oxford University Press, 2020), Gosetti-Ferencei presents a new interpretation of existentialist thought and literature, exploring, beyond the existentialism of the French phenomenologists, its historical origins in nineteenth century German, Danish, and Russian thought, contributions to existentialism of African-American thinkers, and its relevance for the social and environmental challenges of the twenty-first century.

Gosetti-Ferencei’s previous book, The Life of Imagination: Revealing and Making the World (Columbia University Press, 2018), is grounded in philosophy and a range of other disciplines, including cognitive theory, evolutionary anthropology, aesthetics and literary theory, and offers a new theory of imagination as both emerging from the wider cognitive ecology of our embodied life and engagement with the world, and affording its transformation and transcendence. In contrast to a long tradition of philosophy that sequestered imagination from cognition proper, in this work Gosetti-Ferencei demonstrates how imagination must be understood as multimodal, shaping our ordinary experience and affording the heightened manifestations of creativity in scientific discovery and artistic and literary creation. Among other accomplishments of the book is the development of an understanding of cognitive play (drawing from Kant, Schiller, Nietzsche, and Husserl), which show how creativity affords ‘situated transcendence.’ and in so doing both relies upon, and diverges from, the operations of ordinary thinking. This expansive and probing account of imagination demonstrates its reach across human experience and its crucial role in shaping and transforming our relationship to the world.

Previous works include Exotic Spaces in German Modernism (Oxford University Press 2011), in which Gosetti-Ferencei illuminates the construction of the ‘exotic’ in modern German literature. The rendering of spaces projected as exotic is shown to situate examination of the modern self and its relation to a foreign other, sometimes exploiting, otherwise destabilizing, colonialist or Eurocentric assumptions. She engages prose works of Hofmannsthal, Dauthendey, Hesse, Benn, Brecht, Kubin, Zweig, Kafka, and Thomas Mann, also mining the 19th century speculations of Nietzsche and other German philosophers as the theoretical foundation for modern literary challenges to the self and European modernity.

Reflection on the quotidian, or the everyday, in literature, art, and phenomenology comprises the subject of The Ecstatic Quotidian: Phenomenological Sightings in Modern Art and Literature (Pennsylvania State University Press 2007), which won an Outstanding Academic Title award from the American Library Association. Gosetti-Ferencei there demonstrates analogous structures of reflection in phenomenology, modern literature and visual art, in their respective defamiliarizations from everyday experiences. She engages the ideas of Nietzsche, Freud, Heidegger, Benjamin, Merleau-Ponty and Wittgenstein, along with literary works by Rilke, Proust, Ponge, Sartre and others, and the visual art of Morandi, Twombly, and Cézanne, in illuminating the relation between the everyday and the ecstatic.

In her book Heidegger, Hölderlin, and the Subject of Poetic Language (Fordham University Press 2004), Gosetti-Ferencei reconstructs Hölderlin’s fragmentary poetic theory, and his theoretical and poetic responses to the ideas of Kant, Fichte and Schiller, in order to critically address Heidegger’s interpretations of the poet and their political entanglements. She demonstrates that Hölderlin’s poetics, while inspired by Enlightenment ideals, supports a theory of poetic subjectivity both tragic and analeptic in nature, a model which at once structures a reverent human relationship with nature and evades the problematic ontology of Heidegger’s notion of the history of Being.

Gosetti-Ferencei’s current projects include a forthcoming introduction to philosophy of imagination, and a study of nature and ecology in modern literary thought, including in Hölderlin, Nietzsche, Kafka and Rilke, along with writers across English- and French-language modernisms.

On Being and Becoming: An Existentialist Approach to Life (Oxford: Oxford University Press, 2020).

“Uncertainty, Realism, and the Self in Kafka,” in From the Enlightenment to Modernism: Three Centuries of German Literature, ed. Carolin Duttlinger, K. F. Hilliard, and Charlie Louth (Oxford: Legenda, 2021).

“The Phenomenology of Poetry,” in Language and Phenomenology, ed. Chad Engelland (London and New York: Routledge, 2020).

“The Imagination of Animals: Rilke, Kafka, and the Philosophy and Literature of Embodied Cognition,” in The Animal Inside: Essays at the Intersections of Philosophical Anthropology and Animal Studies,’ ed. Geoffrey Dierckxsens et al (Lantham, MD: Roman and Littlefield, 2016).

“Radnóti, Blanchot, and the (Un)writing of Disaster,” Comparative Literature and Culture 17.2 (June 2015).

“The World and Image of Poetic Language: Heidegger and Blanchot,” Continental Philosophy Review 45:2 (2012).

“Writing in Philosophy and the Literature and Philosophy of Writing (Plato, Mann, Blanchot)’ in Philosophy, Literature, and the Crisis of Metaphysics, ed. Sébastian Hüsch (Würzburg: Königshausen & Neumann, 2011).

“Immanent Transcendence in Rilke and Stevens,” The German Quarterly 83:3 (Summer 2010).

“Foreshadowings of the Kafkaesque in Alfred Kubin’s Drawings,” Hyperion: On the Future of Aesthetics vol. III, no. 4 (December 2008).

“The Poetics of Thinking: Heidegger and Hölderlin,” in Literature and Philosophy: A Guide to the Contemporary Debates, ed. David Rudrum, (New York: Palgrave/Macmillan, 2007).

“Between Animality and Intellection: Phenomenology of the Child-Consciousness in Proust and Merleau-Ponty,” Analecta Husserliana: The Yearbook of Phenomenological Research vol. 93 (2007).

“Language and The Flesh of Being: Merleau-Ponty and Kristeva,” in Interrogating Ethics: Essays on Merleau-Ponty, edited by James Hatley (Pittsburgh: Duquesne University Press, 2006).

“Moral Sentiment and the Ethics of Representation in Holocaust Literature,” Analecta Husserliana: the Yearbook of Phenomenological Research, vol. 84 (2006).

“Trompe l’Oeil and the Mimetic Tradition in Aesthetics,” Analecta Husserliana: The Yearbook of Phenomenological Research, vol. 87 (2006).

“Confirmations of Life in a Phenomenology of the Poetic Image,” Analecta Husserliana: The Yearbook of Phenomenological Research, vol. 83 (2004).

“The Aesthetic and the Poetic Image: Beyond the Ekphrastic Divide,” Philosophy Today, vol. 29 (Summer 2003).

“Phenomenology of the Mysterious: A Reading of Rilke’s Sonnets to Orpheus,” Phenomenological Inquiry vol. 26 (Fall 2002).

“Ash in the Clouds: Unearthing Goethe,” in Literary Imagination: Review of the Association of Literary Scholars and Critics, 4:3 (2002).

“The Ecstatic Quotidian: Literary Phenomenology in Sartre and Rilke,” Journal of the Association of the Interdisciplinary Study of the Arts, 7:1 (2001).

“Figures of the Feminine in Heidegger’s Theory of Poetic Language,” in Feminist Interpretations of Heidegger, edited by Patricia J. Huntington and Nancy Holland (College Park: The Pennsylvania State University Press, 2001). 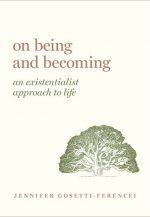 On Being and Becoming 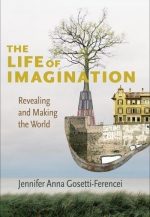 The Life of Imagination: Revealing and Making the World 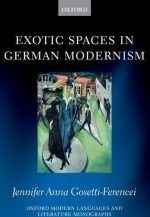 The Ecstatic Quotidian: Phenomenological Sightings in Modern Art and Literature 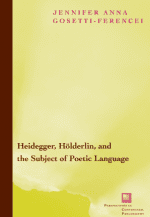 Heidegger, Hölderlin, and the Subject of Poetic Language

After the Palace Burns