When I Grow Upis New Yorker cartoonist Ken Krimstein’s nonfiction graphic narrative based on six of hundreds of newly discovered, never-before-published autobiographies of Eastern European Jewish teens on the brink of WWII, found in 2017 hidden in a Lithuanian church cellar. These autobiographies, long thought destroyed by the Nazis, were written as entries for three competitions held in Eastern Europe in the 1930s, just before the horror of the Holocaust forever altered the lives of the young people who wrote them.

InWhen I Grow Up, Krimstein shows us the stories of these six young men and women in riveting, almost cinematic narratives, full of humor, yearning, ambition, and all the angst of the teenage years.

About the author: Ken Krimsteinhas published cartoons in the New Yorker, Punch, the Wall Street Journal, and more. He is the author of The Three Escapes of Hannah Arendt, which won the Bernard J. Brommel Award for Biography and Memoir, and was a finalist for the Jewish Book Award and the Chautauqua Prize, and also of Kvetch as Kvetch Can. He lives and writes and draws in Evanston, Illinois. 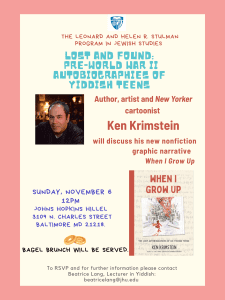