Esther Edelmann studied Hispanic and German literature and comparative literature in Groningen and Leiden (The Netherlands). Her interests include Frankfurt School Critical Theory, Marxism, postcolonial theory, fascism and literature, the violence of and in literature, aesthetics of resistance, critical (anti-)realism, and the return of baroque allegory.

Marcus Heim received his Magister Artium in German Language and Literature, Medieval History, Modern and Contemporary History at the University of Münster in 2010. He had been working for the Film Education Program of North Rhine Westfalia from 2005-2010 and from 2008-2009 was Co-Director of the German House at Macalester College in St. Paul, MN before he became a member of GRLL in 2011. He draws inspiration from Hannah Arendt, Erich Auerbach, Hans Blumenberg, Albrecht Koschorke, Juri Lotman and other cultural critics, hermeneuticians and semioticians. Recent research dealt with the works of Ernest Hemingway, Christoph Ransmayr and concepts of modern and mythical subjectivity. Marcus Heim is currently at the Friedrich Schlegel Graduate School at the Freie Universität Berlin where he is working on his dissertation that aims to describe modes of aesthetic and spatial experience in Peter Weiss’ Aesthetics of Resistance.

Christiane Ketteler completed her magister in 2011 at the Freie Universität Berlin, where she studied modern German literature and philosophy. She wrote her thesis on narratoloy and translation in Joseph Roth’s The Wandering Jews. She is currently finishing her PhD thesis “Revolutionary Remains” on performances and representations of revolution in German film and theater after 1968. Alongside her studies at JHU, she has been working as a journalist, organizer, and translator. Her research interests include German-Jewish literature, theatre and cinema of the 20th and 21st century, the critique of political economy, feminism, alliances and disjunctions of political and aesthetic forms, labor and artistic practices, subject formations on stage and on screen. In the future, she would like to learn film editing.

Anita Martin completed her B.A. in German Literature and Sociology at the Universität Konstanz (Germany), with a thesis regarding the fantastic in the Prinzessinendramen of Elfriede Jelinek. She continued studying Literature and tutoring at the Konstanzer Masterschule, earning a M.A. with a thesis titled “Zweifelhafte Botschaften. Evidenzstrategien zur Vergegenwärtigung von Vergangenheit im Drama.” (“Doubtful Messages: Persuasive Strategies for Representing the Past in Drama”). In 2018-19, Anita was a visiting graduate student and teaching assistant at Johns Hopkins University while preparing for a Ph.D. with Juliane Vogel at the Universität Konstanz, which will focus on Auftreten und Erzählen (Appearance and Narration). Her research interests include drama theory; appearance; rhetoric; narratology and theory of fact and fiction, as well as literary history around 1800.

Bidyum Medhi is interested in exploring the comparative perspectives on nature and the non-human world, and the ways in which this shapes and reshapes ecocritical literary trends in the two literary cultures of Assamese and German. His primary research interest is to look into the questions related to the interface between ecology, economy and the aesthetics of nature. The aim is to depart from traditional/western comparative method based on comparative analysis and to look for “interliterary processe(s)” in a discourse-based context. His doctoral research intends to draw from the idea of “World Literature” propagated by Rabindra Nath Tagore in contrast to Goethes notion of “Weltliteratur,” which emphasized a creation of a homogenous “world culture.” He is trained in German language and literature and holds Bachelor’s and Master’s degrees in German Studies from Jawaharlal Nehru University New Delhi. His M.Phil dissertation, titled ‘The Eco-Discourse with Reference to Monika Maron’s Flugasche,’ attempted to examine the notions of progress, technology and heroism inherent in Maron’s work. He also worked as Assistant Professor at Tezpur University, Assam from 2014-2017 in the department of English and Foreign Languages.

Maya Nitis With degrees in English, Political Science and Philosophy, among others, Nitis has embarked on a route through German Studies pursuing interests in pedagogy and critical theory, focusing on its feminist, Black and queer branches. Languages of Resistance 1: Performativity and Cultural-Political Translation, Nitis’s first book published in 2014, addresses the revolutionary in the intertwinement of language and reality, primarily through the work of Judith Butler in relation to that of Walter Benjamin. Nitis has also published in areas of feminist pedagogy and queer knowledge production in journals including Diacritics and Feministische Studien. Nitis is currently working on a dissertation provisionally titled Literary Agency and Unfinished Knowledge, which queries an agency specific to literary endeavors and gives rise to a conception of knowledge undermining dominant goals of mastery.

Elisa Santucci joined the doctoral program in 2017 after three years at NYU. Born in Livorno, Elisa received a B.A. in Philosophy from the University of Bologna (thesis on Nietzsche’s Zur Genealogie der Moral), an M.A. in European Philosophy from the Manchester Metropolitan University (thesis on N7a7 by Walter Benjamin) and his first Ph.D. in Media and Communication from the European Graduate School, Switzerland, with a dissertation on Benjamin’s Windrose, which was published by Atropos Press (New York, Dresden) in 2013. Other publications include: “Rickels’s Bond, A Review of Laurence Arthur Rickels, SPECTRE” in continent, issue 6.2 / 2017; “Benjamin: Gewalt secondo Scheerbart” in Estetica. Studi e Ricerche, 2/2014; “Benjamin’s International Reception, 18th-20th September 2013, Berlin” in: Radical Philosophy, RP 182 (2013). He is currently working on Paul Scheerbart and Laurence A. Rickels for his research project: B anal. Cipher Scheerbart. 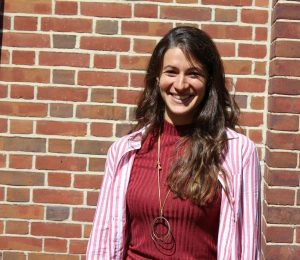 Almut Slizyk studied at the Universities of Würzburg and Padova and graduated in 2014 with a Magister Artium in Italian, English and German Language and Literature. She further completed a two-year teacher certification process in Bavaria with tracks in psychology and language and literature pedagogy while teaching German, Italian and English at middle and high school level. In 2016 she received a fellowship from the German Academic Exchange Service (DAAD) and spent her fellowship year at the University of Washington in Seattle teaching German as a foreign language. Her M.A. thesis on the formation and representation of emotions in Dante’s Vita Nova triggered her interest in self-reflective writing and at Johns Hopkins she would like to further her understanding of autobiography from the 18th to 21st centuries with attention to recent scholarship on affect in Italian, German and French literature. Josh Todarello completed his master’s in German Studies at the California State University, Long Beach, where he worked on the tension between the foreign and the familiar in Thomas Bernhard’s Der Kulturer, which he also translated into English. A consistent interest of his academic work has been the residue of the past in the present as it is found in writing, for example in the work of Walter Benjamin, and in large urbanized areas, such as Los Angeles and Berlin. Further academic interests of his include hermeneutics, the theory and practice of translation, and the archival dimension of modernist fiction, which often propels itself forward by interrogating itself. He is himself a writer of prose, poetry, (and everything in between); his writing explores, among other things, the relation of word and image, form and subject, memory and landscape.

Shengshuang Wang holds degree in Chinese Language and Literature from Nanjing University, and she received her Master’s degree in Comparative Literature from Renmin University of China. Her research interests span a wide variety of topics, including Holocaust, memory, identity, gender and sexuality. Currently, she focuses on the contemporary German writer W. G. Sebald, especially the philosophy of repetition in his works.

Tegan White-Nesbitt earned her B.A. in linguistics with a minor in music at the University of Alaska, Fairbanks in 2016 and her M.A. in German studies at California State University, Long Beach in 2018. White-Nesbitt entered the German program at Johns Hopkins in the Fall of 2018. Her research interests include translation studies, Jewish culture, literary theory, genre theory, the phenomenology of poetry, and the history of poetic forms. As a translator, White-Nesbitt has worked on texts from the eighteenth century to the present and is the major English translator of Swabian poet Walle Sayer, whose then most recent collection Strohhalm, Stützbalken [“A Straw, A Bressummer”] she translated in full while studying abroad at the Eberhard-Karls Universität, Tübingen in 2013. Four of Sayer’s poems appeared in White-Nesbitt’s English translation in the January 2016 edition of World Literature Today.